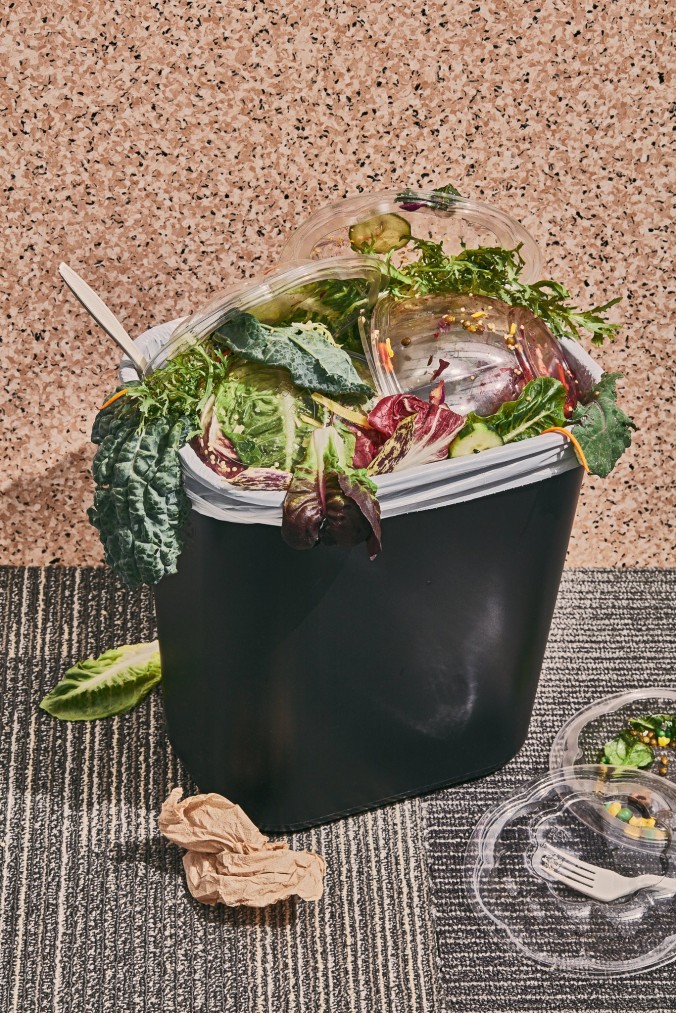 Is Your Salad Habit Good for the Planet?

Popular fast-casual chains brag of sustainability, as customers toss their compostable and recyclable bowls into the trash with wild abandon.

One word: plastic.CreditPhoto Illustration by Stephanie Gonot for The New York Times

Every weekday, shortly after 11 a.m., a line forms at the Broadway and 38th Street location of Sweetgreen, the eco-conscious salad chain. By noon, the line has usually tripled in size. It often takes more than 15 minutes to get to the front.

The scene is similar at the Chop’t at 41st and Broadway, or the Dig Inn on West 38th, or the Just Salad one block south. In the heart of Midtown Manhattan, the evidence is hard to dismiss: Greens, once so unappetizing that parents all over the country had to beg and bribe their children to eat them, have never been hotter. (Almost as hot: their denser, younger cousin, grains.)

At Sweetgreen, the appeal is partly ethical. The ingredients are sustainably farmed, sourced from trusted partners and served with transparency. There are vegan, gluten-free and “warm bowl” options. There are raw beets and organic carrots. There is local feta. It’s enough to make the most wasteful among us feel good about consumerism. Is it any wonder that according to market research provided by Technomic, Sweetgreen is the fastest growing salad chain in the United States?

The moral overtones extend even to the trash. As customers pay and head back toward their various workplaces, they pass an oft-overflowing garbage bin with a proud sign above it that says that all of the company’s utensils, napkins, bowls and cups are plant-based, “which means they go in the compost bin, along with any leftover food.”

“Nothing from inside Sweetgreen goes to the landfill,” the sign declares further, virtuously.

But that’s far from the truth, though it’s not the chain’s fault.

Matt Holtz, a salesman at Microsoft, is “addicted” to Sweetgreen, according to his co-worker, Michelle Munden, and goes almost every day. Mr. Holtz does not compost his disposable bowl once he is done eating, he said, though he “will compost if the opportunity is available.”

Zara Watson, a lawyer who eats at Sweetgreen three times a week, throws the waste from her healthful lunch directly in the trash because she does not have composting at her office. So does Sam Hockley, the managing director at the software company Meltwater, who is willing to eat a Sweetgreen bowl for breakfast, lunch or dinner.

Even Scott Rogowsky, the host of HQ Trivia who last year put his continued employment in jeopardy when he expressed his preference for Sweetgreen, is unable to dispose of his salads responsibly at work, because composting is unavailable at the WeWork location where the trivia app is based…

2 thoughts on “Have Some Salad With Your Plastic”