Janet Marinelli, according to her author’s bio, is an award-winning independent journalist who was director of scientific and popular publications at Brooklyn Botanic Garden for 16 years; according to our read of her work over the last two years she is also a perfect fit with our mission to find at least one story every day that explains the natural world, illuminates the possibilities of entrepreneurial conservation or challenges us to be more careful with natural resources. She brightens our day:

Forgotten Landscapes: Bringing Back the Rich Grasslands of the Southeast

Native prairie and savanna once covered vast areas of the U.S. Southeast from Maryland to Texas, but agriculture and sprawl have left only small patches remaining. Now, a new initiative, driven by scientists and local communities, is pushing to restore these imperiled grassland habitats. 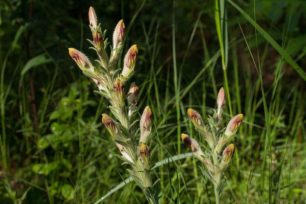 Southeastern grasslands have some of the highest plant richness in the world, home to rare species such as American chaffseed. COURTESY OF TIM MARTIN & USFWS

Dwayne Estes pulls over to the side of a rural road in Franklin County, Tennessee, about 20 miles from the Alabama border. He hops out of his truck and points out a small plant with dainty, trumpet-shaped white flowers with purple-streaked throats. “This is Penstemon kralii,” says Estes, a 40-year-old, 6-foot-3-inch-tall professor sporting a baseball cap and beard, the twin badges of honor for many field botanists. The plant is found almost exclusively at the base of the Cumberland Plateau escarpment, where it survives precariously in narrow, grassy roadside fringes with other rare and threatened species, including a sunflower and a blue-eyed grass yet to be named and described by scientists.

We continue to the top of the steep, densely forested escarpment. Below, a checkerboard of croplands and pastures stretches as far as the eye can see. “Before 1840, those agricultural fields were prairies covering half a million, maybe 750,000 acres,” Estes says. “They were maintained by frequent fires and bison.” The wildfires probably swept up the base of the adjacent escarpment, he adds, keeping it open and sunny oak savanna where the penstemon and its companions could thrive. Like so many southern grassland denizens, they are vestiges of a lost botanical world that once covered as many as 120 million acres from Maryland to East Texas, caught in a vise between habitat loss to agriculture and urban sprawl on the one hand, and encroaching fire-suppressed forest on the other.

The Southeast is one of North America’s great, but forgotten, grassland regions. Its native prairies and savannas have been reduced by more than 90 percent since the first Europeans arrived, almost 100 percent in many areas. Yet the remaining scraps include more grassland plants and animals than the Great Plains and Midwest combined — a big part of the reason why the Southeast coastal plain, the flat, low-lying portion of the region that extends inland from the Gulf of Mexico and Atlantic Ocean, was designated the latest of the world’s 36 biodiversity hotspots in 2015.

“We’re only now realizing how extensive our grasslands used to be. The losses have been truly staggering,” Estes says.

Known as the “prairie preacher,” Estes is executive director of the Southeastern Grasslands Initiative (SGI), headquartered at Austin Peay State University in Clarksville, Tennessee, which was launched last year to bring back the region’s imperiled grassland habitats through science-based regional partnerships and community engagement. To drum up support for the ambitious effort, Estes has crisscrossed the region some 80 times in the past two years, propelled, he jokes, by Mountain Dew and gas station food. “We’re on a mission,” he says.

SGI and its partners are racing to find plants and grassland remnants in danger of imminent extinction. Many remnants cling to existence along fencerows and roadsides, in powerline corridors and in the far corners of old fields. Because these scant remains are barely enough to even imagine what some grasslands once looked like, SGI and its expanding network of collaborators are also engaged in ecological detective work, piecing together tips such as the presence of isolated survivors like Kral’s penstemon, as well as clues in 200-year-old land surveys and other historical artifacts. With this evidence and a growing army of volunteers, they are resurrecting lost grasslands, opening up the canopy of fire-starved savannas and recreating extirpated prairies from scratch on former agricultural fields…