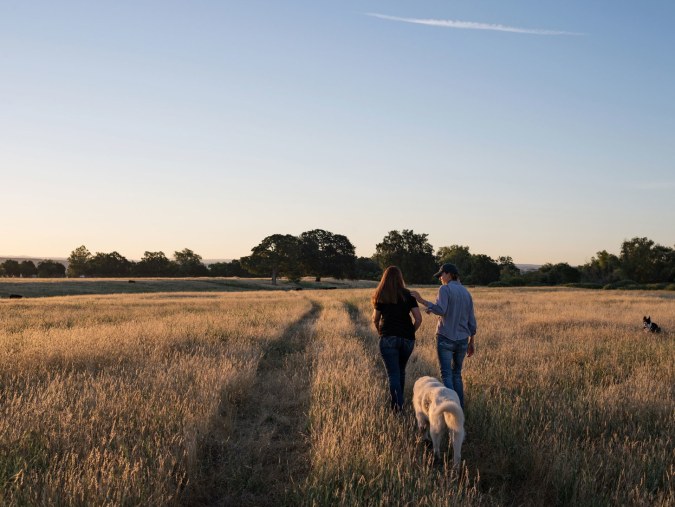 Karin Vardaman, pictured left, walks the pastures with Breanna Owens, the owner of Cobblestone Ranch, in Los Molinos, California.Photographs by Lucas Foglia for The New Yorker

The return of apex predators to both national parks and rugged, yet unprotected areas of the United States impacts conservation and regeneration of biodiversity for both wildlife and native landscape.  Not surprisingly, it also creates challenges within the well established ranching community.

We’re grateful to all those who participate in the process of navigating a successful middle ground.

The Persuasive Power of the Wolf Lady

To bridge the divide between wolf-lovers and ranchers, the conservationist Karin Vardaman had to change many minds—including her own.

Early one morning in April, 2016, Karin Vardaman and four travelling companions woke in a motel in Siskiyou County, a rugged and remote region where rural California meets the Oregon border. They were in a town called Montague—a dot on the map that had begun, in the eighteen-eighties, as a stop on the Southern Pacific Railroad. After visiting a small market to pick up breakfast and snacks, they continued on to the old community hall, a narrow, low-slung building by the railroad tracks. Large, glass-paned windows ran the length of one side; below them, murals depicted horse-drawn wagons from the area’s pioneer days. Outside, a few dozen people were gathering. Watching them, Vardaman had an uneasy feeling. Oh, boy, she thought. Here we go.

Inside, chairs were arranged in a semicircle. Vardaman stood at the center, near a screen on which a PowerPoint slide displayed the title of her workshop, “On Wolves and Livestock.” Tall and sturdy, in her fifties, she has a flowing mane of lustrous red hair, framing slate-blue eyes and a narrow face. She introduced herself to the crowd as an advocate with the California Wolf Center. The Center, she said, was sponsoring a new, collaborative project called the Working Circle, through which it hoped to find a way for cattle and sheep to coëxist with endangered gray wolves.

Before Vardaman could continue, a man in the audience stood up, interrupting her. He wore a cowboy hat and cowboy boots. He calmly thanked her and her team: they had helped the local economy, he said, by shopping at the market. What he didn’t appreciate, he went on, was their coming into town and dictating to the community what it should and shouldn’t do about wolves. As he spoke, his voice rose in anger, and he stepped suddenly toward Vardaman; at the same moment, more than twenty other people rose to their feet. Some waved anti-wolf flyers above their heads. Others held rifle cartridges, their brass glinting in the light. They chanted, “Shoot, shovel, and shut up!”—an anti-wolf slogan. Vardaman watched as several people opened their jackets, revealing handguns.

For most of the last century, there have been no wolves in California; government-sponsored livestock-protection campaigns exterminated the state’s wolf population by 1924. But in December, 2011, a lone male gray wolf from Oregon, known as OR-7, was tracked via radio collar as he crossed into the Golden State. Slowly, over time, a few others followed. In 2014, the gray wolf gained protection under California’s Endangered Species Act; not long afterward, in Siskiyou County, two wolves were spotted by a trail camera. Today it’s thought that there are at least twelve to fifteen wild wolves in the state. This nascent comeback has opened a rancorous breach between California’s agricultural community, which fears losing livestock to wolf attacks, and its environmentalists, who have been galvanized by the idea of an iconic predator resurrected.

A version of this polarizing conflict has played out wherever wolves have reappeared, from Michigan to the Northern Rockies and Washington State. To an extent, livestock producers and wolf conservationists are divided for pragmatic reasons. If a wolf kills a heifer calf, a rancher can suffer a substantive economic hit—one or two thousand dollars, plus the loss of income from all the calves that the mature cow would’ve had over her lifetime. (Since the wolves returned to Northern California, an estimated eleven calves and cows have died in wolf attacks.) Conversely, if a rancher kills a wolf in an area where the wolf population is still recovering, it could be a significant blow to the animals’ survival.

And yet ranchers and conservationists are divided in other ways, too. 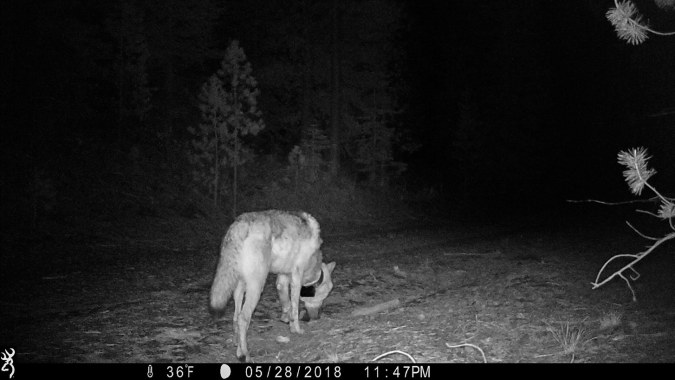 An image of a wolf, captured by a motion-sensing camera set up by a Working Circle range steward, in Northern California.Photograph Courtesy Working Circle Proactive Stewardship Program

Livestock producers live in rural counties and, on issues ranging from environmental regulation to gun control, tend to be politically conservative. Supporters of wildlife conservation, by contrast, are often liberals who live in cities. (It’s urban populations, on the whole, that drive the passage of environmental laws.) In society at large, environmentalists and animal-rights activists advance arguments about animal welfare and meat-eating. But the wolf debate unfolds on its own paradoxical ground. Wolf advocates defend the animals’ right to prowl the landscape, hunting deer and elk; they don’t seem to mind if some cows are eaten along the way. Ranchers are appalled by the prospect of their cattle and sheep being killed by wolves, even though they plan to send those same animals to slaughter anyway. Vardaman and her conservation allies weren’t vegans who wanted to do away with cattle ranching altogether (although some in the world of conservation lean that way). Instead, she hoped to find common ground with independent family producers who see themselves as part of a noble enterprise, entirely different from factory farms.

Since beginning to work on the issue of wolf recovery, in 2014, Vardaman had been trying to reach people in places like Montague. Understanding animals had always come easily to her—it was as if the divide between species didn’t exist. But she was learning that divides between people could be harder to cross. She’d found that, to make headway, she needed to do more than marshal arguments. She had to cultivate mutual respect and a resolute empathy. She also had to open herself to internal changes. Slowly, she had been discovering that one can bridge a divide by transforming as an individual—by becoming the sort of person who can step into the gap…

…The worlds of conservation and ranching are vast and, for the most part, separate. Vardaman became a connector. She met other Wolf People: Timmothy Kaminski, a Montana wolf biologist; Carter Niemeyer, an Idaho wolf biologist and trapper; Joe Engelhart, a Canadian ranch manager who’d stopped shooting wolves and started coexisting with them; and Hilary Anderson, a rancher from Montana who’d learned how to manage around wolves and grizzlies. Vardaman wrote a grant proposal for the Wolf Center, seeking money for a program that would help ranchers prepare for wolves.  A single donor provided most of the funding. In 2016, she began offering day-long workshops at which livestock producers could talk with these wolf-coexistence experts. At Kaminski’s suggestion, the initiative became known as the Working Circle.

That April, the group scheduled workshops in six California ranching towns…The final workshop in the series was held in Montague. In the old community hall, Vardaman and her colleagues listened as the locals chanted, “Shoot, shovel, and shut up!” The meeting seemed to be a lost cause. Then an older rancher with a graying mustache and ruddy cheeks interposed himself between Vardaman and the protester who had interrupted her. The two men squared off, chest to chest. Vardaman saw them clench their fists.

“These people aren’t the enemy—they’re just here to share information,” she recalls the older man saying. “You can say your piece, but if you can’t be respectful, you need to go.”

For a few moments, the room was silent. Then murmuring among themselves, the anti-wolf ranchers filed outside. The workshop resumed, with only ten people in the audience. A little later, though, Vardaman saw three of the protesters slip back in. They stayed until the end, listening.