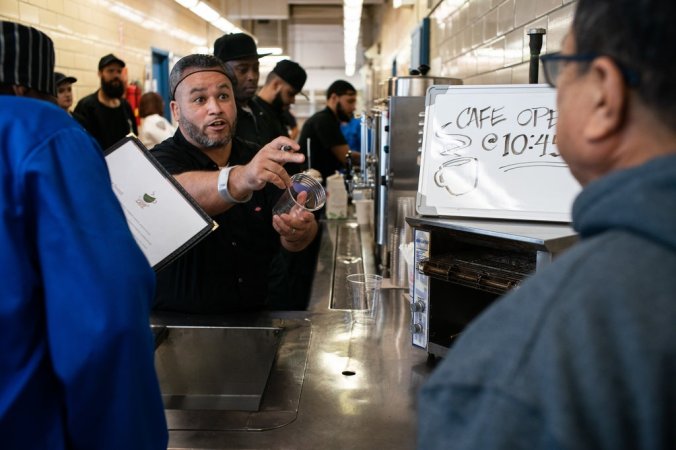 Thanks to Amy Chozick for a great story about coffee, redemption and creative solutions to close out 2019:

Can teaching prison inmates to make lattes give them a chance at a better future?

Officer Green wanted her vanilla latte piping hot. “With vanilla on top, not a lot, just a drizzle, and very hot, don’t make it warm,” she shouted to Eddie Rodriguez, who was taking orders. He nodded and wrote Green on the side of a cup. “Don’t worry, I got ya. Extra hot for Officer Green.” Then he slid the cup down the bar where Mr. Rodriguez and the other inmates in the barista training program at the Rikers Island prison complex were adding ice, steaming milk and grinding beans to load into a $3,000 Nuova Simonelli espresso machine.

It was rush hour at the coffee shop that pops up twice daily inside the staff lounge at one of the nation’s most notorious jails. The uniformed guards formed a sea of blue in the dreary institutional lunchroom, with Maury Povich’s talk show playing on an overhead TV and a smell of waffle fries and bleach in the air. They put in their specialty drink orders: a chai latte for a deputy warden (“not too sweet!”). Four shots of espresso for a guard headed into a long shift (“I need that extra kick”). Five orders in a row of the house specialty, the “Captain T”: an iced caramel latte with whipped cream on top named after a favorite officer.

“Omar, you’re an artist, kid!” one guard said as Omar Jhury, 29, swirled the caramel syrup on top and peeled back a straw in a delicate petal shape.

“Whole lotta drizzles today,” said Randolph Denis, 44, squeezing a zigzag of vanilla syrup atop an iced latte. During my visit, in late September, pumpkin spice, of course, was about to be in season.

Mr. Denis and the rest of the baristas (guards and instructors never call them inmates while they’re in class) were convicted and sentenced to short city sentences at the Eric M. Taylor Center where roughly 730 inmates and 800 uniformed staff coexist each day, not always peacefully…