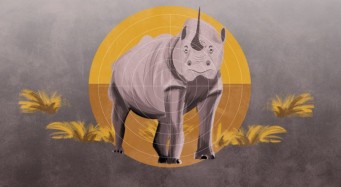 It is a brutal story, and we thank Cathleen O’Grady for telling us about The Price of Protecting Rhinos in the long form narrative such a complex topic deserves:

Conservation has become a war, and park rangers and poachers are the soldiers.

Hsst!” hisses Charles Myeni. “Leave space!” Silently, the men in his anti-poaching unit spread out as they move through the bush in single file, leaving a few feet between them.

Myeni explains his command to me: If a rhinoceros poacher attacks us and we’re all neatly squished together in a line, he whispers, they “can take us all out, one-one-one-one. We’re all gonna die.”

Is he serious? His sardonic half smile is difficult to read. He may just be trying to scare me, the city-dwelling white girl tagging along on his morning patrol through South Africa’s Somkhanda Game Reserve. But I still stick as closely as I can to him and his automatic rifle.

The three guns between the six men on patrol should be enough to overpower any poachers, Myeni tells me, since a poaching team usually carries just one rifle. The last would-be rhino poachers apprehended on the reserve, in March of last year, were traveling in a pair: One carried a gun, and one carried an ax to hack off the rhino’s horn.

Myeni’s patrol moves swiftly, scouring the ground for tracks. The terrain is treacherous: The tawny, knee-high grass disguises ditches, rocks, and tree roots, while vicious thorn trees throw out branches at face height. The dry air on this bright winter morning is hot in the sun and freezing in the shade. Myeni spots rhino tracks and follows them for a while to check that they are not joined by human footprints, which would be a sign that someone had followed the rhino. But the tracks are old, and no rhino—or human—materializes.

South Africa’s most recent rhino-poaching crisis came out of the blue. In 2007, the country lost just 13 rhinos to poaching; the next year, that number jumped to 83, kicking off a nightmarish escalation. Losses peaked at 1,215 in 2014, and deaths are still high: 2018, with 769 rhinos killed, was the first year that losses had dipped under 1,000 since 2013. South Africa is home to 93 percent of Africa’s estimated 20,000 white rhinos and 39 percent of the remaining 5,000 critically endangered black rhinos, making South Africa’s rhino crisis a global rhino crisis.

Demand for rhino horn has skyrocketed in Vietnam, where powdered horn is touted as both a hangover cure and a cancer treatment. Though it has no proven medicinal benefits—of no more value than human fingernails and hair, or horse hooves, which are made from the same material—it is associated with social status. As regional economies have boomed, its use has increased along with ordinary people’s purchasing power…