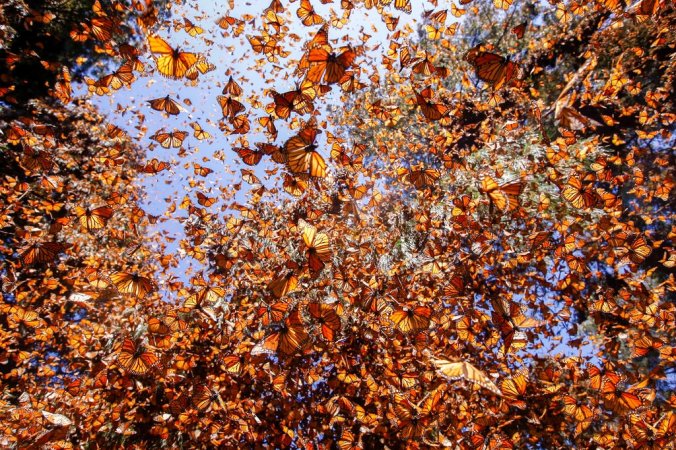 Costa Rica pioneered butterfly farming in the 1990s, and it has been an important export ever since. It is an export oriented to botanical gardens and other natural attractions where butterflies can be released by the thousands in enclosures; it is also an export that feeds the hunger of collectors. It is not a cure-all as Elizabeth Preston, on our radar again after five years, notes:

A study suggests that monarchs bred by enthusiasts were less fit than those that started as caterpillars in the wild.

Monarch butterflies look delicate, but they need to be super-tough to survive their annual migrations. The monarchs of eastern North America may travel thousands of miles to their winter home in Mexico’s Sierra Madre mountains. And, increasingly, they’re not making it, a problem that has been blamed on habitat loss, climate change and pesticides.

In an effort to boost the struggling insect’s numbers, some butterfly enthusiasts buy monarchs raised in captivity or breed their own, then set them free. But research published Wednesday in Biology Letters shows that captive-born monarchs are weaker than wild ones — adding evidence to the arguments of those who warn that releasing them does more harm than good.

Earlier research has shown that monarchs raised in captivity are less likely to reach Mexico. To find out why this might be, Andy Davis, an ecologist at the University of Georgia, and his co-authors raised 83 monarchs in two different indoor settings, using eggs from wild butterflies. They also caught 41 wild monarchs and brought them into the lab. Then — like a miniature NFL combine — they put the insects through a series of tests.

The scientists measured the monarchs’ wings, because larger, more elongated wings are known to help with migration. They also assessed the orange color of the butterflies, which can range from pale yellow to nearly brick-red. Monarchs with darker orange wings are more successful migrators, though this probably has to do with the butterflies’ overall fitness and not the color itself.

Finally, the scientists tested the monarchs’ strength. During migration, monarchs may have to hold on tightly to trees during high winds or storms. The researchers attached a wooden rod to an electronic force gauge and wrapped the rod in plastic mesh so the butterflies could grip it. Then they had each butterfly grasp the perch with its feet, and gently tugged the butterfly upward until it let go…