Our bee obsession on this platform has many explanations, but my personal motivation for following the science of bees goes back to a summer in the late 1970s when I worked for a beekeeper. I cleared brush and vines from the forest edge to make way for more bee-friendly plantings. I worked within sight of a dozen active bee colonies in boxes where I could see buzzing swarms constantly. I learned to be calm around them from the man who tended them. He used a poncho, a mask, and a smoker when opening the boxes to remove honey, but other times walked among them with no protective gear. To my surprise the resins from Toxicodendron radicans–poison ivy, poison oak and poison sumac–did more harm to me than the bees I worked around. In fact, I was never stung by those bees. Not once.

Which explains why when we finally had the chance to start our own bee colony I was all in. Above is a bee box, with found objects inside, above and below it. The bees inside had nested at the top of our house so we had a beekeeper extract them. He gave them this new home in a location where we have been clearing brush to make way for coffee planting. The old table had been in the chicken coop and the mysterious disk was on the roadside headed for recycling. One month later now, very happy bees.

Above is a small sampling of the vines and brush I have been clearing from the land near that hive. History may not repeat, but sometimes it rhymes. As it happens, on my arm I have some of the same toxins from vines like those 40 years ago. The clearing work started in March and is nearing completion to make way for several hundred shade trees and several thousand coffee plants.

One section of this clearing has already received twenty banana plants, based on the practice of our friends at Hacienda la Amistad. These make excellent companions to the coffee and are pollinated by bats, so provide another kind of ecological service too complex to discuss in a post primarily about bee surprises.

So, with all that in mind I was very happy to come across the story below by Cara Giaimo. Her work first appeared in our pages last October, then again a few months ago–both times related to birds. Somehow I missed this short article on bees from earlier this year, and I thank her for it now for making me laugh when there is not enough other news to laugh about: 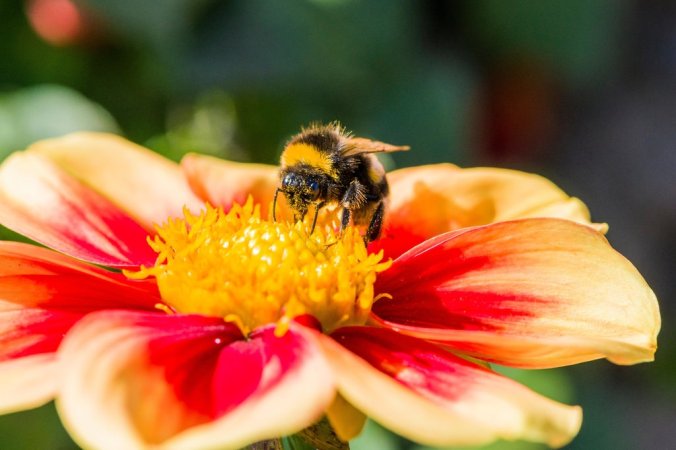 Bumblebee Vomit: Scientists Are No Longer Ignoring It

Regurgitation is an important consideration when it comes to the process of pollination.

The bumblebee is a discerning nectar shopper. When choosing which flowers to gather the sticky substance from, it might consider a plant’s distance, the shape of the petals and how sugar-rich the nectar is.

But according to a study published Wednesday in the Journal of the Royal Society Interface, there’s another variable the bees may be considering on a nectar run: How fast can they barf it back up?

Nectar is available in a number of concentrations, even within the same plant species. A recent study of field beans — conducted by the lab that studied bee vomit — found that some flowers produced a light ambrosia of 15 percent sugar, while others went up to a syrupy 57 percent. Although sweeter nectar provides more energy, it is also more viscous, which makes it more time- and energy-consuming to deal with. The thicker the nectar, the longer it takes for a bumblebee to lap up, which cuts into the energy gains the extra sugar provides.

In recent years, a number of researchers have timed bees drinking different concentrations of nectar, and used this information to figure out what sugar levels might be “most appealing to bees.” This knowledge can be used to help entice them to the right crop plants, enabling efficient pollination, said Jonathan Pattrick, a postdoctoral researcher in the University of Oxford’s Department of Zoology and the lead author of the new paper…