Thanks to the BBC for this:

The ancient trade holding back the Sahara Desert

For millennia, the gum of the acacia tree has been prized for its unusual culinary and medical uses. Now, the trees are part of a continent-wide effort to hold back the Sahara Desert.

In the Malian bush, a scattering of acacia trees grow through the wild grass and shrubs that spread for miles across the semi-arid scrub. Herders graze cattle nearby and local people fetch firewood. The acacias are among the taller and faster-growing trees of this habitat, with old individuals reaching high above the surrounding scrub. 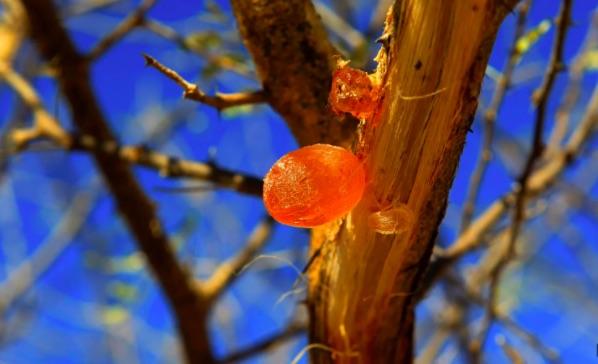 Gum arabic spills out naturally from wounds in the acacia tree, but it can also be extracted by making deliberate incisions into the bark (Credit: Reuters)

This is the Sahel, a savannah that stretches across six countries in mainland West Africa. This dry strip of land between the tropical rainforests to the south, and the Sahara to the north, sees just three months of rain a year. It’s a region that is changing quickly. Climate change has seen the Sahara Desert grow around 100km (62 miles) southward since 1950, and is expected to continue the same trend in the coming decades.

But the Sahel’s acacia trees, growing close to the boundary of the desert, are at the heart of a reviving ancient trade with the potential to stem the advance of the Sahara.

To see what is special about these trees, you have to tear off a strip of bark or make a small incision into the tree. The sap that exudes from the wound is a pinkish substance that dries into a round springy ball. This is gum arabic, and it comes from two species of tree found in the Sahel: Acacia senegal and Acacia seyal.

For more than 2,500 years, this gum has been used for its properties to bind and emulsify substances (essentially to help them mix). The Ancient Egyptians used it in food, hieroglyphic paints and in their mummification ointments. Today gum arabic is used in a wide range of products, from soft drinks to pharmaceuticals.

Mali was one of the two historic exporters of gum arabic, along with Senegal and Sudan, but the trade dwindled in the second half of the 20th Century. Until the 1960s, Mali had produced more than 10,000 tonnes of crude gum arabic a year. But a combination of natural and political factors destroyed the trade, such that by 1992 Mali exported only 32 tonnes of crude gum per year.

Meanwhile, from 1960 to the present day, Mali has lost 82% of its forest cover, according to Fatoumata Koné, the deputy technical secretary of the country’s National Working Group on Sustainable Forest Management and Forest Certification. Nearly 450,000 hectares (1.1 million acres) have been lost between 2001 and 2018 due to several factors, including bush fires and tree clearance for fuel.

Without forest cover, the process of desertification accelerates as the soil is able to hold less water, and becomes more vulnerable to erosion.

One of these initiatives is the planting of 1,250 hectares (3,090 acres) of Acacia senegal in the Malian locality of Nara, near Mauritania. The Malian agricultural firm Déguessi Vert is working with the farmers and Mali’s principal agricultural research agency the Institute of Rural Economy on the plantation, which also aims to develop health infrastructure and schools in the villages involved in Mali Acacia Project, a program of 6,000 hectares (14,800 acres) of acacia in different parts of the country…