Thanks to National Public Radio (USA) for this: 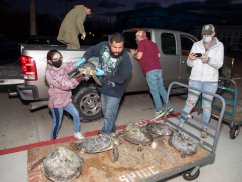 The Valentine’s Day winter storm of 2021 left Texans shivering in the dark, but that didn’t stop intrepid volunteers from heading out into the suddenly frigid waters of the Gulf Coast to save thousands of sea turtles at risk of dying. This is the story of the largest sea turtle “cold-stun” event in recorded history, according to scientists.

As the historic storm plunged temperatures into the 20s, boat captain Henry Rodriguez headed out into the choppy waters of the Laguna Madre off South Padre Island.

“After noticing the first turtle, we noticed a whole bunch of other turtles just popping up,” he says. “We recovered 105 turtles the first day.”

Rodriguez takes out clients on his 30-foot Triton fiberglass boat to fish for snapper and redfish, spot dolphins and watch SpaceX rocket launches. He considers sea turtles his companions. When the weather turned bitterly cold on Feb. 14, he knew they wouldn’t survive. So he pulled on four long-sleeve shirts and his thermal jumpsuit, got some volunteers together, and went to work.

“The adrenaline kicked in and we picked up a whole ton of turtles,” says Mark Grant, one of his helpers. “We loaded up this boat to where we could barely walk on the deck. That’s how many turtles we pulled out each time we went out.”

Sea turtles are cold-blooded creatures that depend on water temperature to regulate their body temperature. When the water falls below 50 degrees, they become catatonic, they can’t swim, and eventually float on the surface.

In turtle talk, this is a cold-stunning event. They happen to sea turtles — which are listed as an endangered species — every year from the coasts of Massachusetts to Florida to Texas. But most cold snaps only affect a few hundred animals, and the weather warms quickly…