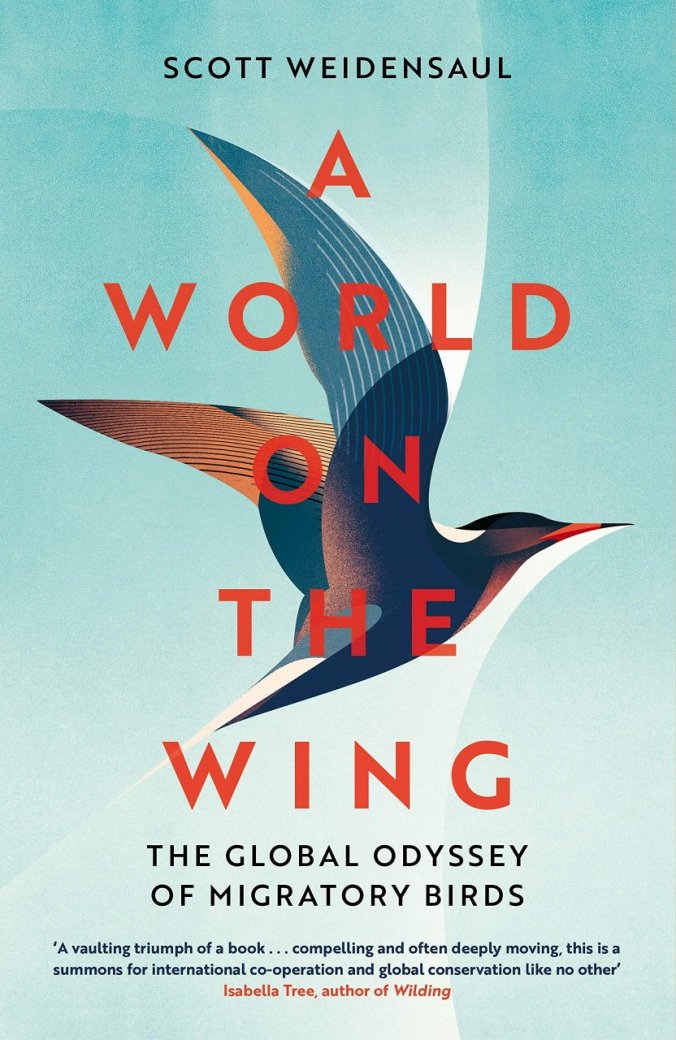 When a respected naturalist mentions eBird, or the Cornell Lab of Ornithology, our family’s attention is rapt. I now realize that Scott Weidensaul first appeared in our pages in 2012, and then twice  since then before today. This time is different because he is interviewed by Dave Davies, one of the great conversationalists of our time, and they are discussing Mr. Weidensaul’s new book (click the book image above to order it from a non-Amazon source). The discussion does not shy away from the challenges related to bird populations, but has plenty to smile at too:

Scott Weidensaul has spent decades studying bird migration. “There is a tremendous solace in watching these natural rhythms play out again and again,” he says. His new book is A World On the Wing.

This is FRESH AIR. I’m Dave Davies, in for Terry Gross, who’s off this week. Did you know that when some migratory birds prepare for flights that can take them thousands of miles, their intestines and digestive organs actually shrink while their heart, lung and leg muscles can double in size? That’s just one of the amazing facts you can learn from our guest, Scott Weidensaul. He spent decades studying migratory birds, reporting on and writing about them and doing fieldwork and tracking and conservation efforts. The scale of bird migration is staggering, involving billions of birds, and the diversity of the species’ mating, nesting and flying habits is awe inspiring. In a new book, Weidensaul writes about what he calls this majestic global pageant and about the threats the animals face. One study found that since 1970, roughly 30% of North American birds have disappeared, more than 3 billion of them. Scott Weidensaul has written 30 previous books, and his articles have appeared in Audubon, National Wildlife and other publications. He co-founded Project SNOWstorm, which tracks and studies snowy owls and is a founder of the Critical Connections project, which is tracking the migration of birds that breed on national park lands in Alaska. His new book is “A World On The Wing: The Global Odyssey Of Migratory Birds.” He joins us from his home in Milton, N.H.

Scott , welcome back to FRESH AIR. You know, you’ve been doing this for so many decades, but you write in this book that your fascination with birds really goes back to a pivotal moment when you were 12 years old. You want to share this with us?

SCOTT WEIDENSAUL: Sure, Dave. I grew up in the mountains of eastern Pennsylvania. That’s where I’ve lived almost my entire life. And not all that far from where I grew up is a place called Hawk Mountain Sanctuary, which is the world’s oldest sanctuary for birds of prey. It was established in the 1930s. And it’s this high, windswept ridge along the Appalachian Ridge-and-Valley system, and along which every fall, tens of thousands of hawks and eagles and falcons and vultures migrate south. And I had been campaigning pretty hard as a kid to – for my parents to take me to Hawk Mountain. I was a nature nut pretty much right out of the womb. And as you say, you know, when I was 12 years old on what turned out by dumb luck to be just one of the most – one of the best migration days of the fall, there was a strong northwest wind blowing. The sky was full of migrating raptors.

And, you know, it’s rare that you can point to a single day in your life and say, this day changed my life. But that day, actually, I got hooked on raptors because birds of prey are cool. You know, they’re majestic and they’re awe-inspiring. And for a 12-year-old to be sitting on these rocks a thousand feet above the valley, watching red-tailed hawks and sharp-shinned hawks and golden eagles passing by was intoxicating. And ever since that day, I’ve – migration has had its hooks in me, raptors have had its hooks in me, and it’s taken me all over the world. And that passion has never diminished at all…

Read the transcript or listen to the podcast here.