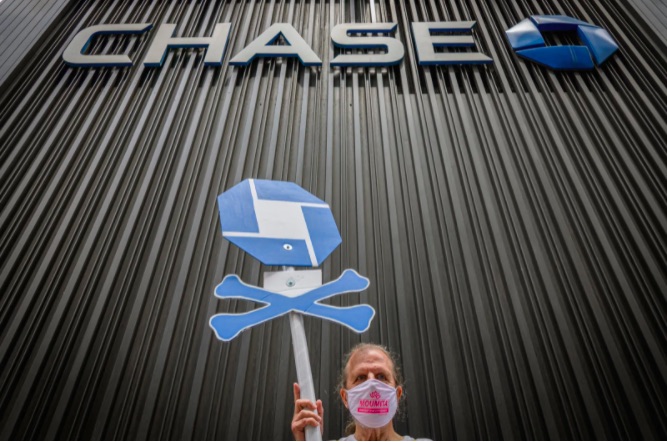 A climate activist picketing outside a Chase Bank branch in New York earlier this year. Photograph by Erik McGregor / Getty

It is a no-brainer to oppose Line 3, but mere opposition does not amount to much. Action is the thing. And action is not always as cumbersome as it may sound. For example, if you bank with the people who are bullish on the future of oil, and who mix your money up with that money, it is time to rethink that relationship. Pull your money out of that bank:

“Greenwashing” is too kind a term; this is more like careful sabotage.

Travellers arriving in an unfamiliar city used to worry that they’d climb in a taxi and be driven to their destination by the most circuitous route possible, racking up an enormous bill. That’s pretty much what Big Oil and its allies in government and the financial world are doing with the climate crisis—in fact, at this point, it’s the heart of the problem.

Yes, there are a few bitter-enders who refuse to acknowledge that change must come. Earlier in the summer, the Saudi Minister of Energy, Abdulaziz bin Salman, reportedly told a Bank of America gathering that “every molecule of hydrocarbon” will be drained from his country’s oil fields. But most fossil-fuel profiteers have learned to talk the talk. Jamie Dimon, the C.E.O. of JPMorgan Chase, for instance, has lent more money to the fossil-fuel industry than anyone else—but he was wise enough to say, in April, that “climate change and inequality are two of the critical issues of our time.” The bank has pledged that, by 2030, it will invest a trillion dollars in “green initiatives that boost renewable energy and clean technologies.” Does that mean one of America’s largest financial institutions is moving away from fossil fuels? Of course not. Last year, Chase once again topped the charts as Big Oil’s biggest financial lifeline. Indeed, earlier this month, DeSmogBlog released transcripts from an “energy capital conference” held earlier in the year. There, Chase’s managing director, Greg Determann, was asked by one expert if the company was “still going to be lending to oil and gas companies.” “For a long time,” Determann said, without hesitation. “Mr. Dimon is quite focussed on the industry. It’s a huge business for us and that’s going to be the case for decades to come.”

The same logic that governs companies often governs countries, too. As the veteran energy analyst Ketan Joshi pointed out, the Australian Prime Minister, Scott Morrison, has set the de-rigeur target of “net zero by 2050,” but, in April, indicated that “the trajectory to any net-zero outcome is not linear, and anyone who thinks it is I think doesn’t get it.” Morrison traced a curve in the air with his hand after he spoke, Joshi noted, “suggesting emissions reductions occur very late in the 30 years between now and 2050.” “What we are seeing here is a mumbled acknowledgement of the macro problem, but an aggressive refusal to consider the micro components that comprise it,” Joshi wrote. “It is the core engine of climate inaction.”

This is absolutely correct. We call it “greenwashing,” but that’s too technical a term. We should call it what it is: people with a vested interest are learning how to slow-walk this crisis. They’ve done it with a thousand other crises, too, of course—one thinks of how, following the Supreme Court’s ruling in Brown v. Board of Education, segregationists managed to delay action for a decade or more, focussing on a single phrase in the decision: “with all deliberate speed.” But here they’re doing it in the face of an absolute deadline imposed by science. As the United Nations’ Intergovernmental Panel on Climate Change has made clear, we must cut emissions in half by 2030 or our chances of meeting the targets that we set in Paris just six years ago fall by the wayside. Slow-walking is sabotage—smiling, and deadly.

And, in the course of that slow-walking, Big Oil is figuring out how to game the system in every way possible: as Inside Climate News recently reported, energy companies and their lobbyists are filling the infrastructure bill with billions of dollars for carbon-sequestration projects—essentially, getting taxpayers to fund equipment to capture the climate-destroying gases that Big Oil’s products emit. That’s absurd: it would be much cheaper to simply shut down those power plants and build out solar and wind power instead. But, for the fossil-fuel industry, preservation of the business model is paramount—they want to burn the stuff they own, no matter the consequences. The Biden Administration is caught in a very hard place: the White House is sincerely trying to accelerate climate action, but to do so it has to get past industry allies in the Democratic Party (Joe Manchin, for instance, who fears that we’re “going to the EV” too fast), not to mention a business-friendly judiciary, which has, for instance, blocked Biden’s plans to stop new drilling leases on federal lands. That’s why, one guesses, you get leaders who know better, like the domestic-climate czar, Gina McCarthy, repeating old bromides about “all of the above” energy supply, or ignoring the increasingly bitter protests over follies like the Line 3 tar-sands pipeline, which runs through Minnesota…