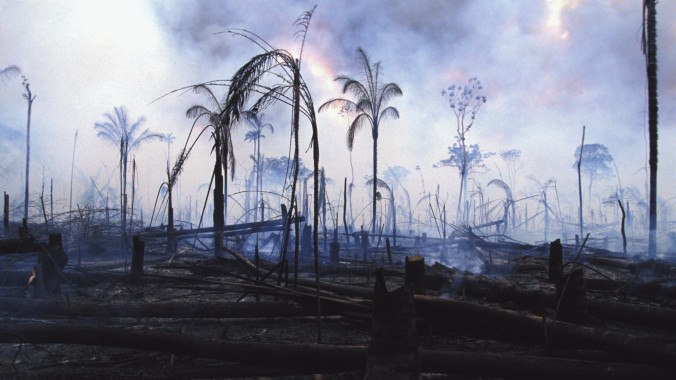 This article by Robinson Meyer, a staff writer at The Atlantic and the author of the newsletter The Weekly Planet, is worth reading if Brazil’s role in climate change has been on your mind:

Deforestation Is a Crime

A new bipartisan bill would treat it that way.

The world doesn’t agree on many things, but one of them is that global deforestation is a problem. If deforestation were a country, it would be the world’s third-largest source of climate-warming pollution, after the United States and China. (It would also be a terrible place to live—bulldozers everywhere and no shade to speak of.) Parts of the Amazon now emit more carbon pollution than they capture because of deforestation, a recent study found.

Knowing about a problem is, of course, different from knowing what to do about it. Two years ago, the world watched some 40,000 fires burn across the Amazon rainforest, more than twice the usual rate, producing so much smoke that they darkened the sky of São Paulo, Brazil, hundreds of miles away. The fires risked damaging the roughly 3 million species that live in the Amazon—or, worse still, triggering a feedback loop of dieback in the forest. These fires were mostly man-made: Farmers and ranchers were setting them illegally so that they could expand their cattle operations. World leaders pressured Brazil to end the fires and offered their support, but Jair Bolsonaro, the country’s president, declined any help.

Public attention moved on, but the ranching problem did not. The United States now imports nearly 60,000 tons of Brazilian beef a year. A cow raised on that deforested land may now be in your cheeseburger, Rick Jacobsen, a commodities expert at the Environmental Investigation Agency (EIA), told me. Brazil simply has no way to track individual cattle through its maze of ranches, some of which are on illegally deforested land.

This is how many stories about the destruction of the natural world seem to go: The world’s attention homes in on a crisis, nothing changes, attention goes elsewhere. These problems seem so big that we’re implicated in them somehow—someone ordered that burger—and yet we can’t really do anything about them on the necessary scale. Shrug (guiltily, perhaps), move on.

But this is why we have laws, through which we can try to attack such problems at the scale necessary to shift reality, at least by a few million acres. Most illegal deforestation is driven by farmers hoping to produce a few key commodities, which global consumers keep demanding more of. Now, as part of a global effort to take on the root causes of deforestation, Congress may amend the century-old law that prevents companies from importing illegally trafficked animals and plants into the United States for the first time in more than a decade. A bipartisan group of lawmakers has proposed expanding that law, called the Lacey Act, to cover six commodities—palm oil, soybeans, cattle, rubber, pulp, and cocoa—that are among the largest drivers of illegal deforestation…