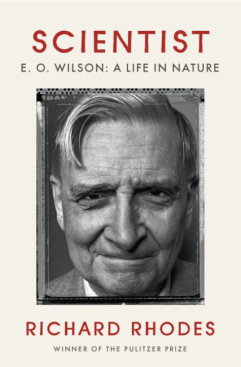 This book, about a scientist who has featured in plenty of posts on this platform, is introduced by one of our favorite writers with some juicy gossip from the halls of academia. I had no idea that the biology department at Harvard divided along the lines described here; the how is the juicy part and the why makes some sense–all for the best–knowing what we know now. As an aside, having taken my first calculus course as a doctoral student at age 30, with undergrads as classmates, I had a jolt of painful memory that made me even more respectful of this biologist’s determination. The second book reviewed in this essay is one we have pointed to previously, and the research that led to it was also featured much earlier. The backstory presented in this essay brings the science to life, so do read through to the end:

Where Have All the Insects Gone?

Scientists who once documented new species of insects are now charting their perilous decline—and warning about what it will mean for the rest of us.

In the summer of 1942, Ed Wilson, age thirteen, decided that it was time to get serious about research. He had already determined that he wanted to be an entomologist, a choice made partly out of interest and partly out of injury. As a child, he’d been fascinated with marine life. One day, he jerked too hard on a fish he caught, and one of its needlelike spines lodged in his right eye. The lens had to be removed, and, following the surgery, to see something clearly he needed to hold it up near his face. Insects were just about the only animals that submitted to this treatment.

That summer, Wilson was living with his parents in Mobile, Alabama, in a run-down house that had been built by his great-grandfather. He resolved to survey every species of ant that lived in an overgrown lot next door. This proved to be quick work, as there were only four species. But one of them turned out to be, as Wilson put it nearly eighty years later, “the find of a lifetime—or at least of a boyhood.” It was a species that Wilson had never seen before; nor, it seems, had anyone else north of Brazil.

That species is now known formally as Solenopsis invicta and informally as the red imported fire ant. Native to South America, the creature has, from a human perspective, many undesirable characteristics. Its sting produces first a burning sensation—hence the name—and then a smallpox-like pustule. It has a voracious appetite and will consume anything from tree bark to termites to the seeds of crops like wheat and sorghum. Red imported fire ants have been known to kill fledgling birds, young sea turtles, and even, on occasion, baby deer. They construct rigid mounds that damage harvesting equipment. When a colony is disturbed, hundreds, even thousands of ants are dispatched, more or less instantaneously, to attack the intruder. Wilson once stuck his arm into one of these mounds and described the pain as “immediate and unbearable.” As he observed to his companions, “It was as though I had poured kerosene on my hand and lit it.”

Red imported fire ants were, almost certainly, introduced into the United States in cargo unloaded at the port of Mobile. When Wilson conducted his survey of the vacant lot, they had probably been in the city for several years but hadn’t ventured very far. This soon changed. The ants began to spread in a classic bull’s-eye pattern. In 1949, while Wilson was an undergraduate at the University of Alabama, he was hired by the state’s Department of Conservation to conduct a study of Solenopsis invicta. Since no one knew much about the species, the teen-age enthusiast counted as an expert. Wilson found that the ants had already pushed west into Mississippi and east into Florida. He was, he later recalled, “exhilarated” by his first professional gig, which gave him the self-confidence to pursue his insect-driven dreams.

By 1953, the red imported fire ant had spread as far north as Tennessee and as far west as Texas, and the so-called Fire Ant Wars had begun. In an early skirmish, the state of Mississippi provided farmers with chlordane, an indiscriminate, organochlorine pesticide long since banned. It made little difference. Next, the U.S. Department of Agriculture embarked on a campaign to spray heptachlor and dieldrin—two similar insecticides that are also now banned—over millions of acres of farmland. The campaign killed countless wild birds, along with vast numbers of fish, cows, cats, and dogs. The ants kept marching on. (“The research basis of this plan was minimal, to put it mildly,” Walter R. Tschinkel, an entomologist at Florida State University, has observed.) Undaunted, the U.S.D.A. launched itself into a new battle, this time claiming that it was going to eliminate the ants entirely, using Mirex, yet another since-banned organochlorine. In the late nineteen-sixties, more than fourteen million acres were sprayed with Mirex, which is a potent endocrine disrupter. The effort appears to have had the perverse effect of helping Solenopsis invicta spread, by exterminating any native ants that might have stood in its way.

As the U.S.D.A. was raining down destruction, Wilson’s career was taking off. He received a Ph.D. from Harvard and was offered a position on the university’s biology faculty. The job was supposed to be temporary, but by the time he was twenty-nine he had been granted tenure.

Wilson thought of himself as a naturalist in the venerable tradition of Joseph Banks, the English botanist who sailed with Captain Cook in 1768. Wilson loved to explore places no entomologist had surveyed before, and once spent ten months collecting ants from New Caledonia to Sri Lanka. But he was fated to follow a different path. Wilson became a professional biologist just as it was becoming clear that the biosphere was unravelling. Though he resisted the knowledge at first, later he would become perhaps the most important chronicler of this crisis—the nation’s first great post-naturalist.

Wilson is now ninety-two and lives in a retirement community in Lexington, Massachusetts. He’s the subject of a new biography, “Scientist: E. O. Wilson: A Life in Nature” (Doubleday), by the journalist Richard Rhodes. Rhodes, who’s the author of more than twenty books, including “The Making of the Atomic Bomb,” interviewed his subject several times before covid hit and they had to switch to the phone. During one of Rhodes’s visits, he ran into an old friend, Victor McElheny, a journalist who lives in the same retirement community and, as it happened, had written a biography of Wilson’s nemesis, James Watson. “Small world,” Rhodes observes.