Edward Constance and Brian Souyana race on Rasta Rocket, made from plastic drain pipes and fishing buoys that washed up on Aldabra. About 68 tonnes of marine litter a year is washed ashore

Do not ask yourself whether this will change anything; just smile and acknowledge that it is probably not hurting anyone to have some creative fun with environmental disasters:

When environmentalists on a Seychelles atoll decided to race boats made from ocean litter, they had 500 tonnes to pick from 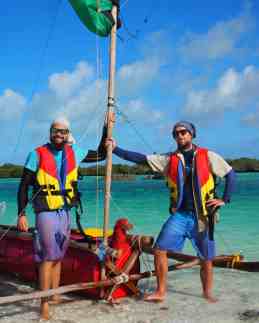 Red Lion is the kind of boat you would not see in most regattas. Its frame is made of bamboo, sourced from washed-up fishing equipment, and it uses two old oil drums for buoyancy.

These were two of the boats in the inaugural Aldabra Regatta: an ironic attempt to draw attention to marine plastic pollution by racing boats made from marine debris.

Organised by the Seychelles Islands Foundation (SIF), a non-profit organisation that manages the Aldabra atoll, the event was a fun but nevertheless last-ditch effort to fight back against the waves of plastic washing up on this Unesco world heritage site.

“A significant portion of three boats was made from marine litter associated with the fishing industry,” says Luke A’Bear, the science coordinator for Aldabra and part of a team that lives at the isolated research station all year.

The bamboo for Red Lion comes from fish-aggregating devices (FAD) – floating objects used to attract certain species of fish. They are often abandoned by the fishing boat to save fuel on the journey back to shore. Huge chunks of bamboo, which can take years to degrade, wash up on the beaches of Aldabra, blocking turtles from coming ashore to nest.

“Sadly, there is no consequence and very little incentive for FAD recovery,” says A’Bear, explaining how the decision to hold the regatta felt like a desperate move. “It is going to take years for any meaningful policy or legislation to come into force.”

Another boat, Wakanda, built by Rickpert Woodcock, an electrician, and Alex Rose, who works in logistics, with wood recovered from the beach, also used washed-up floats for stability. A fourth, Floppy, was built by the manager of Aldabra island, Jude Brice, using part of a wooden canoe that had washed ashore…