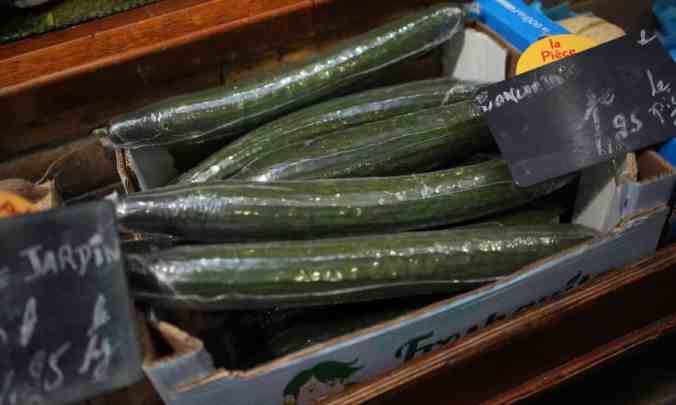 From Saturday cucumbers, leeks, carrots and about 30 other fruits and vegetables will no longer be sold in plastic in France. Photograph: Thibault Camus/AP

We know that there is too much plastic in our lives and that something must be done about it. Over the weekend, in France, the most obvious thing was done:

Law bans sale of carrots, bananas and other items in plastic as environment groups urge other countries to follow

A law banning plastic packaging for large numbers of fruits and vegetables comes into force in France on New Year’s Day, to end what the government has called the “aberration” of overwrapped carrots, apples and bananas, as environmental campaigners and exasperated shoppers urge other countries to do the same.

Emmanuel Macron has called the ban on plastic packaging of fresh produce “a real revolution” and said France was taking the lead globally with its law to gradually phase out all single-use plastics by 2040.

Spain will introduce a ban on plastic packaging of fruit and vegetables from 2023. For years, international campaigners have said unnecessary plastic packaging is causing environmental damage and pollution at sea.

From New Year’s Day, France will ban supermarkets and other shops from selling cucumbers wrapped in plastic, and peppers, courgettes, aubergines and leeks in plastic packaging. A total of 30 types of fruit and vegetables will be banned from having any plastic wrapping, including bananas, pears, lemons, oranges and kiwis.

Packs over 1.5kg will be exempt, as will chopped or processed fruit. Some varieties, including cherry tomatoes or soft fruits such as raspberries and blueberries, will be given longer for producers to find alternatives to plastic, but plastic packaging will be gradually phased out for all whole fruits and vegetables by 2026…