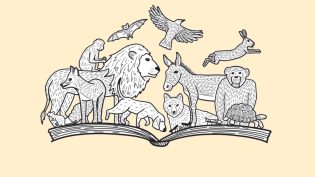 An illustration from “Aesop’s Animals” by Hana Ayoob.

The fables attributed to Aesop were mentioned twice in posts in our pages during our first year. Again the following year. And plenty of times since then. But there is plenty more to say about the menagerie, and a new book takes on that task. Dan Falk offers this Book Review: The Science Behind Aesop’s Menagerie in Undark Magazine (click the image above or the title below to read the entire review at the source):

SEVERAL CHAPTERS into “Aesop’s Animals: The Science Behind the Fables,” zoologist and science writer Jo Wimpenny explains that, as a very young girl, she sometimes wanted to be a dog. (In a footnote she credits growing up in Wales for encouraging her “to think outside the box.”) This childhood fantasy, as the reader can readily imagine, involved crawling along the ground on all fours. But that only gets one part-way toward doghood, as the grown-up Wimpenny would come to realize.

For starters, we humans rely primarily on our senses of sight and hearing, but for dogs, it’s smell that reigns supreme; as she explains, a dog’s sense of smell is somewhere between 10,000 and 100,000 times better than our own. Dogs “can also wiggle their nostrils independently, helping them to pinpoint the direction of a smell,” and there’s some evidence that the left and right nostrils serve slightly different purposes, with the right tuned to “novel and potentially threatening smells,” and the left responding to “familiar, non-aversive smells (such as food) and scent from other species (such as human sweat for tracking purposes).” Who knew?

Wimpenny’s entertaining book is a kind of guided tour of the animal world, but the subjects are not chosen at random. Rather, she focuses on a subset of the animals mentioned in “Aesop’s Fables,” a beloved collection of tales credited to an enslaved man named Aesop, thought to have lived in Greece some 2,500 years ago. And so, along with dogs, we get to know wolves, crows, donkeys, lions, monkeys, ants, grasshoppers, hares, and tortoises. Each chapter takes its name from a specific fable — “The Crow and the Pitcher,” “The Wolf in Sheep’s Clothing,” and so on.

Wimpenny cites the work of scholars who have spent decades studying the behavior of these animals, along with her own research; and, as the childhood dog story suggests, many of her own experiences as well. While we learn a great deal about what various animals can do, the deeper insights come from attempting to discern why they do them. In a nutshell, we yearn to know what goes on in their heads.

Do animals have, for example, a sense of self? The answer varies from species to species of course, but some results seem to be reasonably robust. For example, chimpanzees appear to pass the mirror test: When exposed to their own reflections, they eventually come to understand that the animal that appears to be behind the glass is actually them.

Darwin asked similar questions more than 180 years ago, though it was the behavior of young orangutans, rather than chimps, that he observed at the London Zoo. Beginning in the early 1970s, psychologist Gordon Gallup Jr. conducted an array of mirror tests with chimps; as Wimpenny explains, he observed that, over time, they would “inspect body parts that were only visible with the mirror, including the inside of their mouths and their genitalia; they picked food from their teeth and mucous from their eyes; and they also made faces and blew bubbles.”…