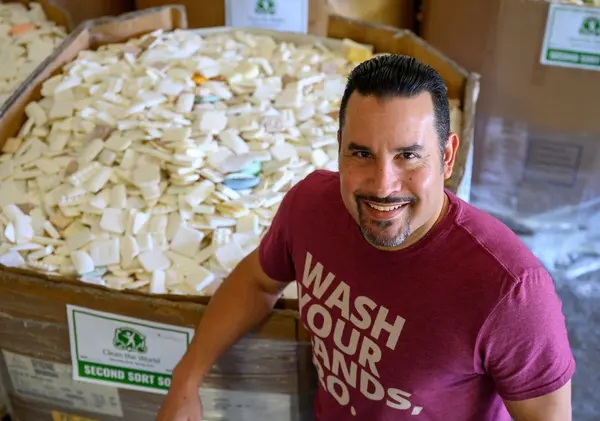 Shawn Siepler, the founder of Clean the World, with used hotel soap before it will be recycled for those in need. Todd Anderson for The New York Times

Reusing things versus wasting them has been a major theme in these pages, especially in relation to travel and hospitality. Looking back at posts about washing hands for a cleaner world and then another about soap making for the same, it is not surprising we had already featured Clean The World in a couple earlier posts. Thanks to Victoria M. Walker for this conversation with the founder:

Getting the World Clean, One Recycled Bar of Soap at a Time

Meet Shawn Siepler, the founder of Clean the World. The nonprofit recycles partially used soap left behind from hotel guests for those in need.

When hotel or motel guests check into their rooms, they expect at the very least to be greeted with a clean space, a made-up bed and in the bathroom, soap.

But what happens when you leave that soap behind?

They typically end up in the trash, said Shawn Siepler, the founder of Clean the World, a nonprofit founded in 2009 that recycles bar soap from over 8,000 hospitality partners, including Marriott International and Walt Disney Resorts, for those in need. By collecting, melting, reforming and packaging partially used soap left behind by hotel guests, the nonprofit has distributed nearly 70 million bars of soap in more than 120 countries, including Romania, where many Ukrainian refugees have arrived.

Clean the World currently focuses on repurposing bar soap in seven warehouses worldwide. Companies can enroll in the program online and receive boxes to collect discarded products at their properties. Full boxes are shipped to the nonprofit’s warehouses.

The organization now has approximately 60 employees, but its beginning was far more humble, with Mr. Siepler and a small group of family and acquaintances scraping used soap by hand with potato peelers in a garage in Orlando.

“The first time that the police came by the garage, they wanted to see what all of us Puerto Ricans were cooking. So I gave them a tour,” Mr. Siepler said during a video interview.

The conversation has been edited for length and clarity.

Before starting Clean the World, you traveled a lot as a sales executive. How did your job lead you to the nonprofit?

I was traveling — New York on Monday, Chicago on Tuesday, St. Louis on Wednesday, Los Angeles, Thursday and back — and two clients that I personally managed were Target and Best Buy, both headquartered in Minneapolis. I was in Minneapolis in a hotel room when I came up with the concept of Clean the World.

In Minneapolis, my alcohol consumption had to be increased to stay warm. So it was one of those nights that I’m like, “What happens to the soap?” and called the front desk to ask. And they said it was thrown away — they actually told me to have another cocktail.

I was doing very well, but had an itch of wanting to do something on my own and thinking about sustainability and green technology as an entrepreneur. And that led to me ask, “What happens to the soap?” I was looking for items that could be recycled…