Solar power, one of the renewables with the greatest promise, continues to improve: 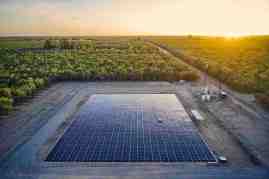 A solar array in Madera County, California, with panels placed side-by-side on the ground. ERTHOS

With the push for renewables leading to land-use conflicts, building highly efficient utility-scale solar farms on ever-smaller tracts of land has become a top priority. New approaches range from installing PV arrays that take up less space to growing crops between rows of panels.

From the ground, the new solar farm shimmers like a mirage oasis on a hot summer day. Instead of row after slanting row of shiny panels stretching taller than corn, this array, mounted directly on the earth, lies flat as water. From the air, it looks like an acre-sized swimming pool. Yet despite its modest stature, this new type of photovoltaic plant — one of five now producing a combined 2.5 megawatts of energy in California’s Central Valley — can match the output of conventional solar farms nearly three times its size.

In a meadow in southwestern Germany, solar panels stand upright in long, thin lines, like a series of fences. While farmers raise hay in the wide spaces between rows, the vertical power plant generates carbon-free electricity for the nearby town. Across the border in France, both wine and watts flow from panel-topped vineyards. Tea grows under solar panels in Japan, while pollinators are nurtured in the United States. And from Canada to Australia, utility-scale solar farms producing power for thousands of homes share their space with sheep.

These diverse approaches have the same goal — to help meet the burgeoning global demand for green energy by lightening the footprint of solar farms.

The sharp and immediate cut in fossil fuel emissions needed to keep climate change in check requires a massive ramp-up in clean energy production around the world. The International Energy Agency calls for 630 gigawatts of new solar power and 390 gigawatts of new wind power to be added each year by 2030. (One gigawatt can power roughly 190,000 average U.S. homes.) That growth rate is quadruple the record set in 2020. For solar power, it amounts to building the world’s largest current solar farm nearly every day…