Folding paper was a frequent topic for us starting in 2011, but origami specifically has been featured only a few times. This holiday season at the American Museum of Natural History we add to the mentions:

The Making of the Origami Holiday Tree 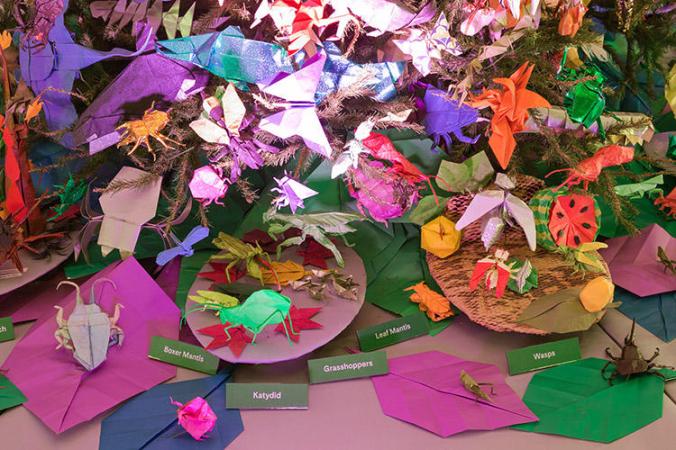 Early each year, as the days begin to get a bit longer and the first signs of spring crop up in Central Park, Ros Joyce and Talo Kawasaki, volunteers from OrigamiUSA and the designers of the Museum’s Origami Holiday Tree start planning for the year ahead.

They begin combing the Museum’s halls in search of inspiration—going from floor to floor to decide on a perfect theme and to find just the right exhibits to re-create as origami models on the tree.

Precedent is no limit: “Often,” says Joyce, “we see something in the Museum that we want on the tree that has never been folded, so we have to design a model and find a way to fold it.”

With a theme in place, in April the team is ready for action. Lists of models are compiled, paper of many colors and textures is purchased, and volunteers—both children and adults—are enlisted from all over the world and as far away as Japan to fold the intricately complex models—some of which can take days or even weeks to perfect. Eventually, the volunteers create hundreds of new models…

2 thoughts on “Origami At The American Museum Of Natural History”