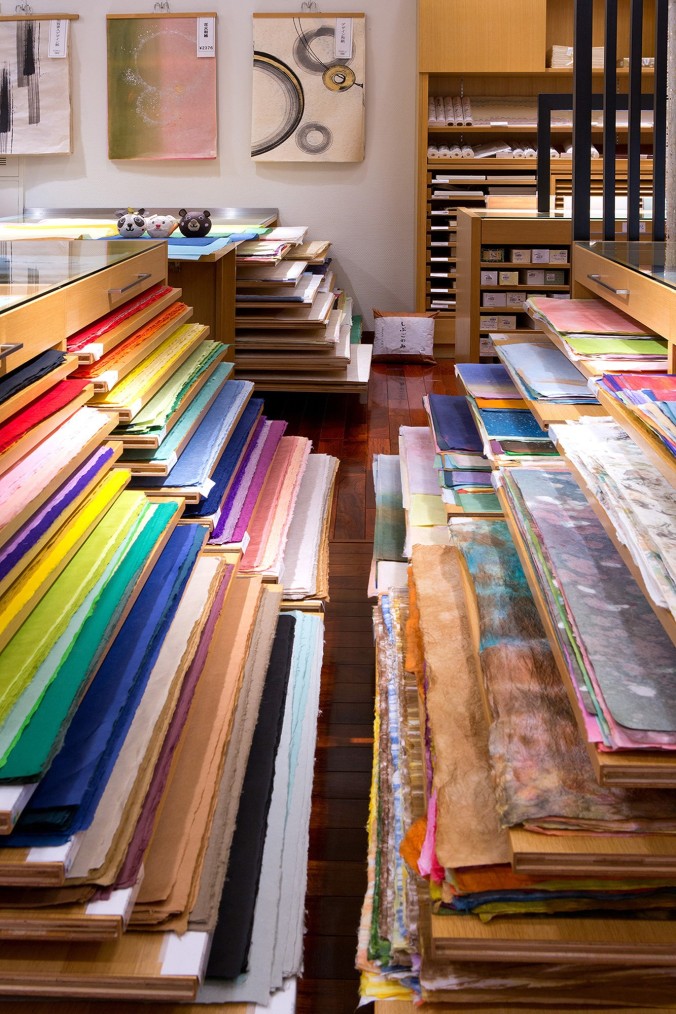 Thanks to Nikil Saval for asking, and to the New York Times for publishing his answer to this question:

Why Is Japan Still So Attached to Paper?

Washi is to the Japanese something like what wine is to the French — a national obsession and point of pride.

The architect Shigeru Ban’s emergency shelters are made mostly of paper.CreditBrent Boardman/courtesy of the Sherman Contemporary Art Foundation (SCAF)

ONE OF THE CLICHÉS of modernity — but a cliché we nonetheless have to live through — is that new forms of technology make us nostalgic for prior ones and the eras they connote. When smartphones emerged, they brought the internet into spaces that were once free of them, so that a poorly functioning flip phone now inspires a hint of wistfulness. The pileup of digitized music since the emergence of the MP3 has prompted a retreat, however niche and ultimately minor, into the world of vinyl records and even tapes. The ransacking of the physical texture of the world — books, newspapers, retail stores, maps — has been so enormous and sudden that it becomes possible to see what we are losing and no longer regard the onrushing future as progress.

Because of the sheer accumulated weight of its past, and the velocity of its rush into the future, Japan offers these contradictions and anxieties of modernity in particular abundance. Japan was geographically isolated for centuries, so the time between the country’s opening — thanks to the gunboat diplomacy of American warships’ arrival in 1853 — and the postwar miracle of reconstruction produced a linear and especially propulsive narrative of an agrarian society becoming one defined by urban futurism. The contrast (and conflict) between ancient and modern is the primary tension in Japan’s modern literary and filmic traditions: rural families experiencing the shock of the city in Yasujiro Ozu’s films of the ’40s and ’50s, or Noh drama in the novels of the Showa-era writer Fumiko Enchi. Everything, from the perfervidness of the country’s electronic manufacturing, the proliferation of its pop culture, the aggressiveness of its building booms — even as a three-decade-long economic decline strips these characteristics of their sheen — seems to serve as a reminder that throughout the postwar era, Japan was a byword for the future.

All of these forces — the past, the present, the future — can be crystallized in one persisting Japanese tradition: the longevity and depth of its papermaking. Perhaps chief among the historical foundations of Japan is that it is a country of artisans, so much so that the national government stipulates requirements for an object to be classified as a “traditional Japanese craft.” The first of these requirements is that an object must be practical enough for regular use, which helps explain the continuing relevance of paper, or washi (which translates as “Japanese paper”). In our digital age, we tend to forget just how practical and versatile the material actually is, and many of its modern uses can be traced directly back to Japan, where the art of handmade washi began with the arrival of Buddhist monks to the islands from Korea in the seventh century.

Since then, washi has been used as stationery, as canvas and as art itself through the rise of origami, which was invented almost simultaneously with washi — but these practices, which remain popular, overshadow just how deeply entrenched paper is in Japanese history. Some 700 years before the Gutenberg Bible, the Japanese were hand-printing Buddhist texts on paper. Before printed periodicals began to appear in Europe in the 17th century as predecessors of the modern newspaper, Japan was printing yomiuri (literally “to read and sell”), handbills that were sold in major urban centers. (Today, Japan maintains the largest circulation of print newspapers in the world, and the second largest per capita.) Paper was the dominant characteristic of Japanese aesthetics, appearing everywhere from domestic rooms to funerals. Paper lanterns were burned at religious ceremonies. Clothing was made from it. It became a popular building material. The shoji screens that were ubiquitous in the Edo period, which spanned the 17th to the late 19th centuries, reflected an appreciation for mood and tactility and, with their lunar opacity, contributed to the clean, mollified serenity that later so attracted Modernist architects like Le Corbusier to traditional Japanese architecture. Even a form of facial tissues, the kind you sneeze into when you have a cold, were used by the Japanese for centuries. Paper has a long history all over the world, but it is to Japan something like what wine is to the French — a national obsession and point of pride. It remains, despite every innovation since, the central material of Japanese culture…