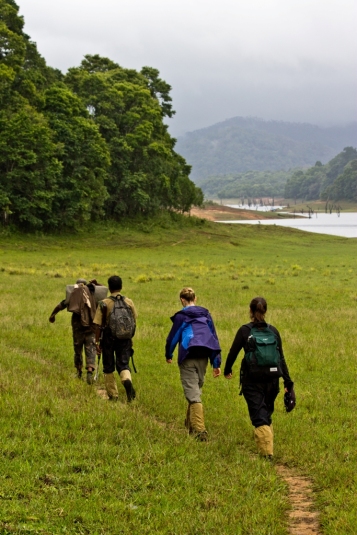 Before my journey to India, I’d never camped. Sure, I had slept in a tent in my friend’s backyard and gone to Girl Scout camp with my Scooby Doo sleeping bag, but I was feet from indoor plumbing and a roof every time. Where’s the fun in that? When I was belatedly asked to join a few interns on the Tiger Trail overnight trip into the Periyar Tiger Reserve, I was skeptical. My summer nights are usually spent running seafood to a hungry customer or chasing a high-maintenance boy across the beaches of the Jersey shore-therefore my presence in the jungles of Asia is quite ectopic, but I am an adventurous person (sometimes to my detriment). I took the opportunity for what it was- a once-in-a-lifetime chance to snuggle up to some tigers.

Despite minimal exercise in recent weeks, I surprisingly managed to keep up with everyone while trekking throughout the jungle jaunt. I could not, however, consider myself prepared for the weather. I’m used to rain, really I am. I was raised on an island where we get days off during hurricane season and I went to college in Ithaca, NY (which only means something to those who have been there for an extended period of time). To reiterate, I have never been camping, and camping during what our guide called “the first days of monsoon season” proved challenging but not entirely mood-ruining.

Seeing animals I have only experienced behind zoo confines and not with anyone as knowledgeable as the crew that joined me was especially thrilling. We saw a lot over the course of our few treks, but the most exciting occurrence happened in the middle of the night at the foot of the trench surrounding our campsite, where five elephants approached us. One particular elephant appeared to exert his authority over one of our guides (who I shall refer to as “Wise Eyes”, WE for short), and WE just took another step towards him, making me glad I had him on my side. His subsequent step happened to be backwards, but hey, it’s the thought that counts.

It should be known that one of Bruce Springsteen’s beloved Jersey girls CAN make it in the wild with the right approach. In my case, I disregarded any attention to my general appearance, gave up every personal freedom I had to the suffocating but kind attention of the guides (this was seemingly arbitrary and specific to just myself as the others had no such scrutiny), and found myself catering my own commentary to the guides, specifically WE and Chief who have a fondness for both ABBA and Titanic for which my knowledge knows no bounds. Yes, I showered immediately upon my return and have washed the clothes I wore camping several times since. Sure, my legs were tired and my hair was awful, but my spirits were high. Did I see the elusive tiger? No, that’s why it’s elusive, but more importantly I found myself doing things outside of my comfort zone and pushing aside the limits I foolishly set for myself.

The lake near camp with our boat, affectionately coined “Titanic”, in the back.
Photo Courtesy of Milo Inman

About the author: I am from a small island in southern New Jersey but have spent the past four years in Ithaca, NY attending Cornell University. I have a Bachelors of Science in Environmental Engineering and will be going back to Cornell in the fall to get my Master’s in Engineering in the same subject with a particular focus on water processes. I like hiking and going to the beach. Indoors, I enjoy reading books and watching movies and baseball ( go Yankees!).

3 thoughts on “A Jersey Girl’s Introduction to Camping”