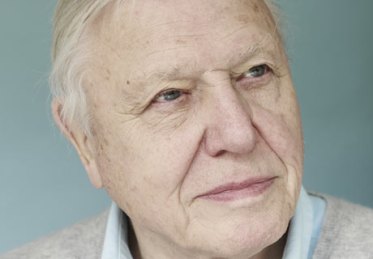 We are reminded that David Attenborough will be sharing another round of greatness in the coming weeks (click the image to the left for the story):

Other stars to receive homage in 60 Years in the Wild include Jane Goodall and Dian Fossey for their ape-observation work, Francis Crick and Jim Watson for their discovery of the structure of DNA, and Richard Dawkins for his ideas about the selfish gene. “These people have completely transformed our understanding of the animal world. We see the world very differently today thanks to them.”

Finding ways to film these scientific visions has taken Attenborough to every conceivable place on the planet. He donned a diving suit for underwater sequences filmed for The Trials of Life in 1990; has been lifted to the top of rainforests by cranes; spat at by cobras; flattened by a belligerent Scottish capercaillie; and, of course, been groomed by gorillas in that glorious sequence in Life on Earth.