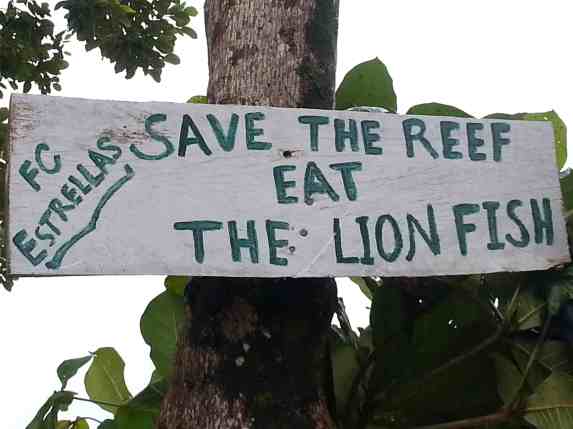 I’ve posted previously about the lionfish invasion that is threatening coral reef and other marine ecosystems throughout the Caribbean, Gulf of Mexico, and Southern Atlantic Seaboard of the United States. As I noted in earlier posts, it is the general consensus of the scientific and conservation community that eradication of lionfish from the Atlantic is impossible. There have been some anecdotal reports that native predators such as groupers and snapper are beginning to recognize lionfish as prey, but there is no systematic evidence, as of yet, of widespread predation. So the conclusion remains that human intervention is the only way to keep lionfish populations in check. The good news is that there is growing evidence that systematic removal efforts can indeed be effective in controlling lionfish populations and in reversing their negative impact on reef health. A study published earlier this year found that populations of snapper and grouper rebound by 50-70 percent once lionfish are removed. And it isn’t necessary to remove 100 percent of lionfish for recovery of native fish populations to take place; the study found that reduction of lionfish populations by as little as 75 percent will do the trick. This is important, given difficulties in reaching lionfish at depths beyond the limits of divers.  Also, removal efforts may become more difficult over time, as lionfish on reefs where regular culling takes place begin to wise up and hide from divers (click here for a cute poetic rendition of findings of a study on this behavioral adaptation).

Thus the challenge is to find a sustainable basis on which to undertake the systematic removals that are needed to keep lionfish populations under control. Clearly, a range of stakeholders need to be involved. Government agencies can’t do it alone (although the Cayman Islands government is contemplating setting up a permanent team of cullers, similar to its mosquito control unit) nor will legions of volunteer divers be sufficient. I’m convinced that for removal efforts to be sustainable over time, various vertical markets need to be developed involving stakeholders who will have a commercial interest in removal. The most obvious of these is the fisher/seafood seller/restaurant cluster.

In an earlier post I wrote about the Eat’em to Beat’em campaigns and efforts to develop a commercial fishery for lionfish. This continues to gain momentum, with lionfish available on the menus of more and more restaurants. A helpful boost for this campaign would be for Monterey Bay Aquarium’s Seafood Watch program to list lionfish as a recommended choice, as is reportedly under consideration. My research and advocacy on this has led to some quite interesting debates on how to approach the notion of a “sustainable fishery” when talking about an invasive species and where the ultimate goal is eradication.

An unexpected obstacle that has arisen to promotion of lionfish as a seafood choice is fear of ciguatera food poisoning (CFP). Last fall, the U.S. Food and Drug Administration confirmed the addition of lionfish to the list of reef fish covered by its CFP warning, even though there are no documented cases of CFP from consumption of lionfish, and some researchers believe that the toxin in lionfish venom may cause a false positive for presence of the ciguatera toxin. I imagine that the scientists at NOAA and in the conservation organizations behind the Eat’em to Beat’em campaign were none too happy with the FDA, given the lack of clear evidence of risk. The good news is that ciguatera contamination in fish is location specific, so risk of CFP is low as long as restaurants and seafood suppliers avoid fish caught in certain areas. The bad news is that ciguatera is prevalent in a number of locations, such as the U.S. Virgin Islands, which have been hard hit by the lionfish invasion. In these locations, development of other vertical markets to incentivize lionfish removal is particularly important. 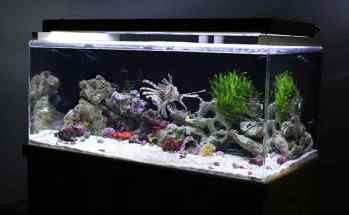 One such market that I didn’t write about in previous posts, but which I’m now quite keen on is the aquarium trade. This may seem counter-intuitive, since it is now generally accepted that intentional release of pet fish is the most likely source of the invasion. Whatever the case, I was surprised to learn that approximately 60,000 lionfish are imported to the United States annually for aquarium use, with the vast majority still coming from the IndoPacific. While some scientists and conservationists advocate a complete ban on import or sale of lionfish for aquarium use, I don’t think that this is realistic or even desirable.  I’d much rather see the demand met by lionfish removed from the Atlantic. Let’s make the guys who caused the problem part of the solution! This is the intent of pending legislation, in the state of Florida, that would ban import or sale of lionfish from their native range. I particularly like the fact that, unlike the market for lionfish as a food item, the aquarium trade market creates incentive for removal of juvenile fish, before they have had a chance to reproduce. What is not clear from the draft legislation is whether it would allow imports of juvenile lionfish from the Caribbean and Central America, or would limit sales to lionfish taken from U.S. waters. I hope that the former is the case, as this could be a very nice livelihood opportunity for fisher communities impacted by the invasion.

Still another vertical market, and one in which I’m personally involved, is use of lionfish spines and tails for jewelry and other decorative items. I’ll provide an update on this market in my next post.