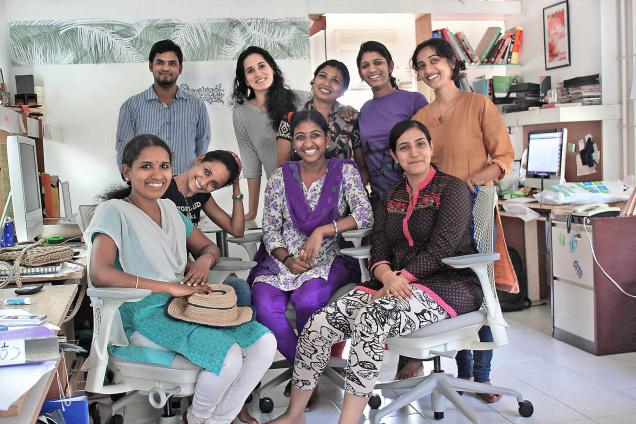 Our friends at Thought Factory and Via Kerala are important members of our collaborative tribe, so of course we were thrilled to read this article highlighting their efforts. We manage their flagship store in Thekkady at Cardamom County, and the new RAXA Shop at Spice Harbour also showcases some of their iconic products.

Malayalam alphabet and the Malayali’s personality have some things in common. Just as the rounded letters, we, as a people, are not aggressive and have rounded personalities. We are a bit complicated, too. Theresa J. George uses Malayalam typography as a metaphor for our culture and the very essence of being Malayali.

Her company Via Kerala uses Malayalam as a motif to bridge the gap between the traditional and the contemporary. “We are proud of our roots, yet there is a slight disconnect between it and the younger generation,” she says.

Through quirky interpretations of things Malayali, it forms connections between the old and the new. “See, it is like this. On the one hand you have Kairali handicrafts and on the other, there is a brand like Fabindia, which is not unique to Kerala. What is there in between which is Keralite, yet something young people can relate to?” Theresa asks.

Though it started as a typography experiment, Via Kerala grew into a concept and soon, a company. Today, it is a full-fledged design shop with signature products, which reflect the ethos of the State.

So, everything the company is about has to do with Kerala. Hand-sculpted magnets in the shape of elephants, T-shirts sporting dialogues from Malayalam cinema, hand-made toy tigers and elephants, bags with Malayalam lettering or fashioned out of a lungi, and board games (based on the Western Ghats) to start with.

It has picked out things that are unique to Kerala and represented them in facets they have never been seen in before. Street typography, for instance, has been adapted on canvas bags. “Street typography and graffiti, especially during the elections, is a common sight through the length and breadth of the State. It is ingrained in our visual culture,” says Theresa.