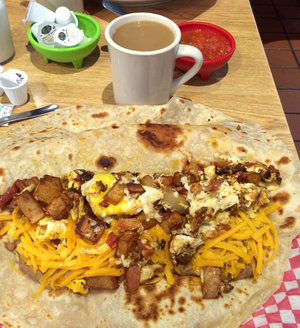 Now that the heavy lifting of food trials of 51 is mostly behind us, we are ramping up food trials at Marari Pearl. Any of you who know members of the Raxa Collective food trials team can attest that some of them remain mysteriously svelte, and others are gravitating into Santa Claus territory. Does this story at The Salt provide any explanations, or possible solutions? It is worth a read:

Last month, a friend and I rode bicycles 738 miles up the spine of Texas from the Rio Grande to the Red River, dodging oilfield trucks and yipping Chihuahua dogs.

All that pedaling had us burning about 5,000 to 5,500 calories every day. And so the 10-day journey — eight days of it riding into a headwind — became a movable feast.

It was the diet that a calorie-counting cubicle dweller can only dream of. Imagine: eating anything you want and never having to worry about belly fat.

Lots of endurance athletes — such as Tour de France cyclists — get to eat this way all the time, though they tend to practice more conscientious “performance nutrition” that probably doesn’t include chocolate donuts.

With our caloric deficits at day’s end in mind, I contacted a noted sports nutritionist before we dipped our back tires in the Gulf of Mexico and began our journey.

Dr. John Ivy, professor emeritus in the department of kinesiology and health education at the University of Texas, Austin, thoughtfully created for us a detailed fueling program to limit muscle damage and counter fatigue, spelling out what to have for breakfast, lunch and dinner.

An example: “About 30 minutes before bedtime have a high-protein snack such as some turkey breast, sliced ham, Greek yogurt or a package of almonds.”

Menu choices were severely limited in the Texas towns like Raymondville or Kingsville or Beeville where we slept. (Are fresh vegetables illegal in Kingsville?)…