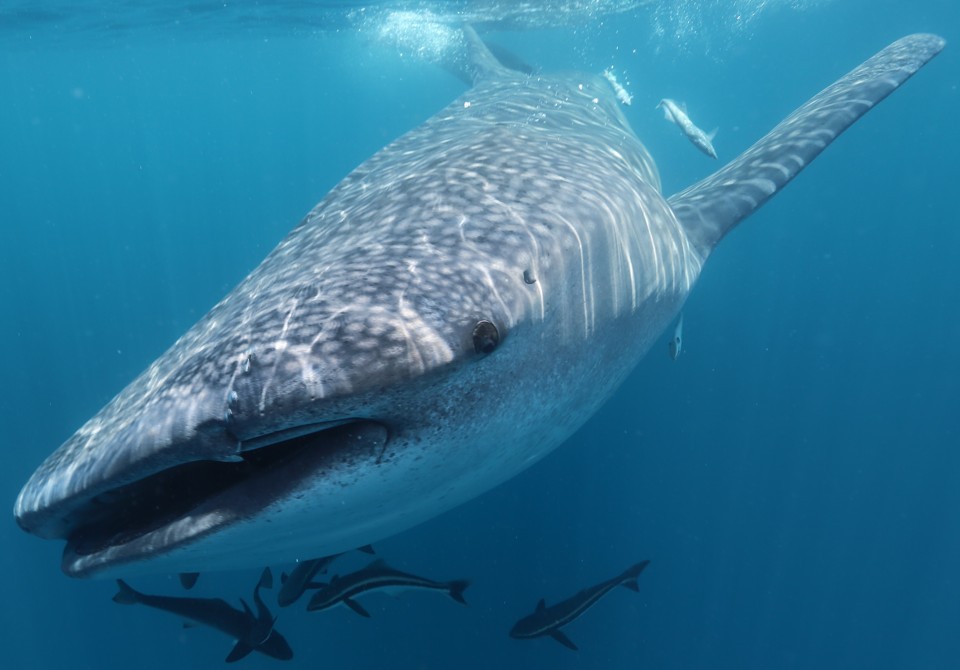 A whale shark in the Persian Gulf. Steffen Sanvig Bach

This is the future of marine ecosystem science (thanks as always to Ed Yong and the Atlantic’s ongoing  commitment to compelling coverage of environmental issues):

The World’s Biggest Fish in a Bucket of Water

If you lean over the side of a boat and scoop up some water with a jug, you have just taken a census of the ocean. That water contains traces of the animals that swim below your boat—flecks of skin and scales, fragments of mucus and waste, tiny cells released from their bodies. All of these specks contain DNA. And by sequencing that DNA gathered from the environment—which is known as environmental DNA, or eDNA—scientists can work out exactly what’s living in a patch of water, without ever having to find, spot, or identify a single creature.

And that helps, even when the creature in question is 18 meters long.

In August 2007, an oil worker named Soren Stig looked over the side of a rig in the middle of the Persian Gulf, and saw a horde of giants. They were whale sharks—the world’s largest fish, with a cavernous mouth and a back that looks like a field of stars. They live throughout the tropical oceans and often gather en masse to feed on plankton and fish eggs. But scientists believed that they were rare in the Persian Gulf, unable to tolerate its superlatively hot waters. And yet, when Stig looked into those waters, he saw huge numbers of them.

He took a photo and uploaded them to an online database of whale-shark sightings. Within a few years, the Qatar Whale Shark Project was born, and scientists were studying the animals with help from the oil workers. By towing nets amid the feeding shoals, they showed that the sharks had gathered to eat the eggs of spawning mackerel tuna. By fitting the sharks with satellite tags and photographing them, they could identify and track individuals—more than 300 to date.

Many of these traditional methods rely on spotting the sharks—a tricky task when water is clouded by fish eggs.  “I’ve been there three times now,” says Eva Egelyng Sigsgaard, from the University of Copenhagen. “The first time, the visibility was really poor, and then out of the blue, this huge mouth comes out at you. They’re completely harmless, but it’s still pretty scary.” But Sigsgaard and her colleagues have now shown that they can use eDNA to study the titanic fish without having to see them at all.

In most eDNA studies, scientists focus on small sections of DNA that vary between species. These act like barcodes, allowing the researchers to work out which animals are present. But Sigsgaard’s team took a different approach: They focused on bits of DNA that vary between individuals. “Rather than just saying there’s whale sharks here, we could go to the next level and look at individuals within the population,” she says.

For example, the team showed that the Persian Gulf whale sharks are part of a population that spans across the entire Indo-Pacific, and are genetically distinct from those in the Atlantic. Then, based on the number of sharks observed in the Gulf and the diversity of their DNA, the team could estimate the size of the entire Indo-Pacific population—around 75,500 females, with a possible range of 54,700 to 96,400. And all of this came from scooping up just 30 liters of seawater…