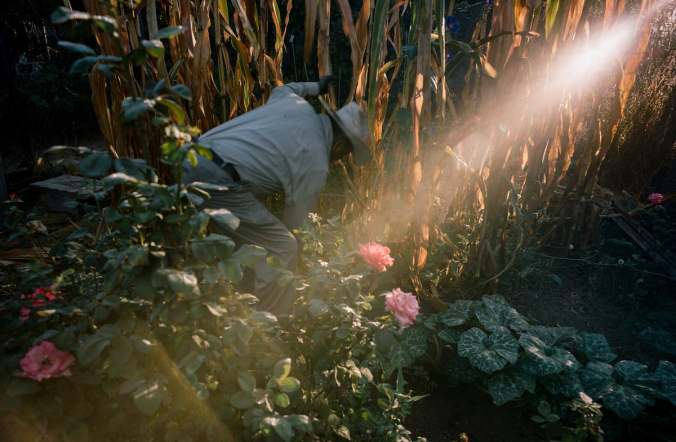 Community gardens have been a regular topic in our pages over the last decade. We never tire of the subject. I personally have a soft spot for roses, especially those found in unexpected places. So, Raúl Laly Fernández, you are my hero. I hope that the next time I am in Los Angeles I will find you in this garden and bear witness to the rose wonders I see in these photographs. Kudos to the writer/photographer Stella Kalinina for capturing this intersection between immigrant culture, working class refuge, and horticultural knowhow:

Mr. Fernández decorates a sitting area in his plot with roses that he grows.

In Los Angeles, Glimpses of an Oasis With Deep Immigrant Roots

The San Pedro Community Gardens have provided physical and spiritual nourishment for the past half a century to multiple generations of immigrant Angelenos. 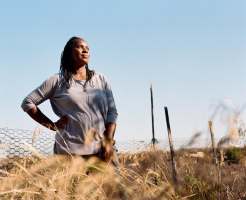 Kimberly Mentlow received a plot in San Pedro after three years on a waiting list. “Being able to plant something or see something grow — it’s extremely therapeutic,” she said.

Ten minutes from my home, next to a decommissioned landfill, a freeway and the largest port in the country, sits an unlikely hillside oasis of vegetables and fruit trees.

Emerging like a mirage from its surroundings, the San Pedro Community Gardens occupy a six-acre parcel of city-owned land in the otherwise highly industrialized area of the blue-collar harbor community of San Pedro, in Los Angeles.

Once part of the ancestral land of the Tongva, an Indigenous people of California, the site — now divided into 224 family plots and one communal plot, each averaging 30 feet by 40 feet — has provided physical and spiritual nourishment to multiple generations of immigrant Angelenos, ever since gardeners first began working the soil here in the 1960s.

As many rural people were pushed into cities and across borders by industrialization and urbanization, some turned to the gardens for refuge, connection to home and a means of preserving and passing on their cultural heritage.

Raúl Laly Fernández, who grew up in the small town of Purépero in the Mexican state of Michoacán, joined the community gardens in 1986, about 20 years after immigrating from Mexico City.

“Most of the people who garden here used to live in Mexico in small towns and on ranches, where they worked the land for other people who own the fields — we call them campesinos,” he said. “And so when they came over here, well, now they are working in the city. For them this land means a lot because working with the soil here, they feel like they are back home.”

Mr. Fernández spoke to me of his early days at the gardens: “Before I retired, I would come here after work, grab a shovel and start working in the ground. And all the stress, all the tension you have from work would just go away,” he said. “I would take care of my plants or go talk to my garden friends. Sometimes, we’d play cards, Mexican games that we know.”…