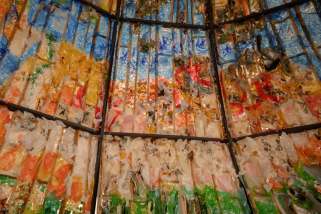 Interior detail of “Earth Poetica,” which is a huge globe created out of plastic waste. Amit Elkayam for The New York Times

The challenge of plastic is a topic that goes back a decade in our pages.  We have featured artisanal plastic upcycling initiatives that we have supported entrepreneurially, as well as articles about other artisanal initiatives. 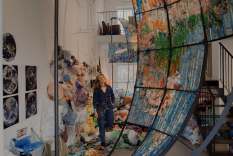 Beverly Barkat in her Jerusalem studio assembling “Earth Poetica,” a huge globe, from plastic waste. Its permanent home will be a building at ground zero in Manhattan. Amit Elkayam for The New York Times

In Beverly Barkat’s quest to connect people with nature, she found that environmental waste could be a powerful medium.

JERUSALEM — When the Jerusalem artist Beverly Barkat began to create an artwork for the lobby of a building in the new World Trade Center complex overlooking ground zero in Lower Manhattan, she aimed to come up with something architecturally site specific and impactful, large enough to connect with the space but not so enormous as to disconnect from the observer.

Barkat had a stark message to convey. Years earlier, she said, she had been struck by an image of children scavenging on a once-beautiful beach awash in plastic waste.

“It stayed with me,” she said. “We are suffocating Earth.”

Barkat, 55, came back to her studio in Jerusalem and began experimenting, stuffing plastic waste in various types of clear containers, seeking a way to connect people with nature and the world that is not border-oriented, not unlike the vast, floating islands — or continents — of waste plastic that form in the oceans and circulate.

Eventually she settled on a method of casting pieces of plastic waste in crystal-clear epoxy resin. Seen from the outside, the sphere has a sort of stained glass effect. “It went from looking like a scrunched-up plastic bag,” she said, “to something that looks like jewelry” or “something very, very expensive and precious.”

The resulting work in progress is “Earth Poetica,” an imposing sphere four meters in diameter, made up of metal-framed panels and an inner skeleton of bamboo segments filled with plastic. The outer surface of the globe, with its authentically proportioned continents and seas, glistens with breathtaking beauty.

But when it is viewed close-up from the inside, through a few panels that will be left open as peepholes, an ugly truth is revealed: Like the rough back of a carpet, the inner surface, which reveals the work, is a chaotic maelstrom of tufts and jagged fragments of plastic bags, bottles, fishing nets and consumer packaging.

We met at Barkat’s studio in downtown West Jerusalem over a three-week period as some of the final panels — a tip of North America, some last parts of Asia and the South Pole — were taking shape. One flank of her airy, double-story space is filled with bundles of plastic bags and other detritus….