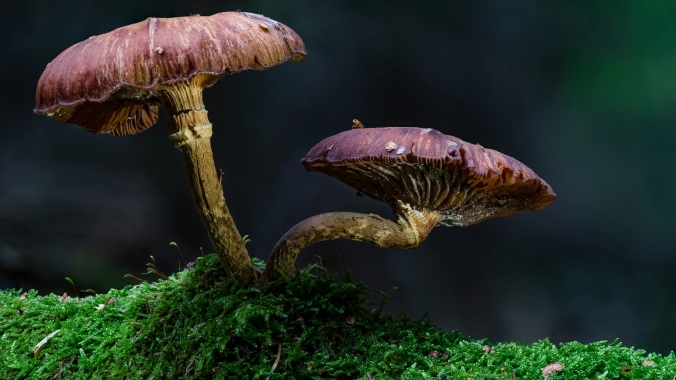 The mushrooms of Armillaria ostoyae (or Armillaria solidipes), the species of honey mushroom that makes up Humongous Fungus (Getty)

We have linked to one Katherine J. Wu article in the past, and that was to share good news; and we linked to stories about humongous fungus a couple of times–not so much news as fascinating; this time there is an ominous implication to the fungus:

The Bigger This Fungus Gets, the Worse We’re Doing

Human actions have turned a usually beneficial fungus into a bringer of death.

Deep in the loamy soil of forests around the world, there exists a fungus called the honey mushroom that makes its living on death. A parasite that preys on weak trees, it sucks its victims dry of nutrients, then feasts on their postmortem flesh. Orchards and vineyards have fallen to it; gardeners, farmers, and foresters spend their days fruitlessly fighting the pesticide-resistant scourge. Although the bulk of the fungus’s mass is underground, its devastation is visible to anyone who’s flown over the gray, balding patches of woodland where the pathogen has felled its hosts.

The honey mushroom is also an exemplar of the extreme forms that life can take. Thousands of years ago, one honey-fungus species, Armillaria ostoyae (also known as Armillaria solidipes), birthed a spore that settled in what we now think of as Oregon, started to spread, and never stopped. “It was just extremely, extremely successful at growing,” says Adriana Romero Olivares, a mycologist at New Mexico State University. “And so it got extremely, extremely large.” Today, that individual fungus inhabits roughly 2,400 acres of earth. Nicknamed Humongous Fungus, it is one of the planet’s largest known organisms, and the biggest ever recorded by area on land.

The honey fungus is an unlikely candidate for such a title: It’s a microbe with an unsettling MO. But Humongous Fungus is also scrappy, flexible, indefatigable—a survivor—and its reach may yet keep creeping out. “As long as you have trees, then this fungus will thrive,” says Mee-Sook Kim, a research plant pathologist at the U.S. Forest Service. “It has, theoretically, indefinite growth potential.” Humongous Fungus has two main rivals for the title of World’s Largest Organism; it may outlast both, not just because it’s resilient, but also because it is unusually well equipped to profit from this planet’s ongoing epidemic of death…