The earthworm in the photo above had been in a bag of soil where a coffee seedling started germinating earlier this year. I was moving the seedling from its small “starter” bag to a larger one, and the earthworm jumped out, wriggling under the nearby supplies I was working with. I did not see it again until it was too late. Since earthworms are good for soil, and we are in the early stages of a soil regeneration project, I was sorry to see the worm lose its life. This particular species of ant is currently everywhere on the property where we are re-planting coffee. I have not seen so many of this type of ant at any point in the last 22 years on this property, and their shocking abundance made me think of that new ant study. Normally we do not repeat sharing of news stories here, unless new information has come to light. It has only been a couple days, but I must share more on the study because my planting work is keeping the subject in front of me, and the photos in this article are that good.

Leaf cutter ants in Costa Rica. The researchers sampled 1,300 locations around the world, estimating ant abundance in different environments in areas such as forests and steppes. Bence Mate/Nature Picture Library, via Alamy

Rebecca Dzombak, who authored this article for the New York Times, will be on our radar from now on:

Counting the World’s Ants Requires a Lot of Zeros

There are 20 quadrillion ants worldwide, according to a new census, or 2.5 million for every living human. There are probably even more than that. 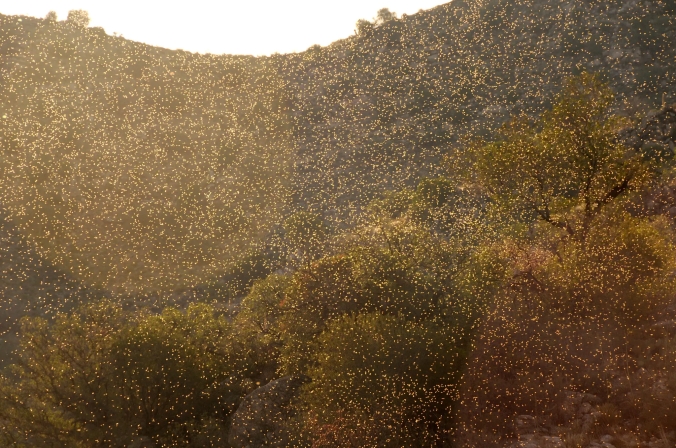 Male leaf cutter ants on the move over the Sonoran Desert in search of females and to make more ants. Norma Jean Gargasz/Alamy

Right now, ants are scurrying around every continent except Antarctica, doing the hard work of engineering ecosystems. They spread seeds, churn up soil and speed up decomposition. They forage and hunt and get eaten. You may not know how much you rely on them.

“Ants are the movers and shakers of ecosystems,” said Nate Sanders, an ecologist at the University of Michigan. “Knowing anything about them helps us understand how ecosystems are put together and how they work.”

“I would argue most ecosystems would simply collapse without ants,” said Patrick Schultheiss, an ecologist at the University of Hong Kong. As some naturalists worry about an insect apocalypse, scientists are racing to keep track of what’s at stake. But they didn’t know how many ants there are or where they live.

Dr. Schultheiss and colleagues have a new ant census count: 20 quadrillion — 20 with 15 zeros following it. Ants outnumber humans at least 2.5 million to 1. Ants biomass is around 20 percent of human biomass, or the mass of carbon from the nearly 8 billion humans now living on Earth. The ant biomass also weighs around 12 megatons, which is about the equivalent of two Pyramids of Giza on a scale…