Back in August, I shared a short video of this behavior that didn’t do the phenomenon justice. Now, with a couple months of filming opportunities behind me, I’ve been able to put together a much more satisfying compilation of jumping behavior footage:

In the video below, watch a Cactus Wren and Northern Cardinal sing to mark their territory, a Hooded Oriole bathe, and a young Loggerhead Shrike call for food to be brought by its parent:

END_OF_DOCUMENT_TOKEN_TO_BE_REPLACED

On Seth’s invitation, I am honored to have a chance to contribute to the group. I have a biology background, but am now retired and have an interest in photographing birds. I use point and shoot cameras, starting two years ago with a Canon SX60HS, graduating to a Sony RX10iii this year. I teach classes in bird photography with these cameras. My interests are in telling a story of birds in a small ecotype such as a pond, or in this case one plant species, a cactus, the cardon of the deserts of Northwest Mexico. These photos were taken over two trips to the Baja California Sur Cape Region, and the majority were on one cardon that was outside the bungalow I was staying at in Cabo Pulmo, Mexico while having my morning coffee.

Pachycereus pringlei, also known as Mexican giant cardon or elephant cactus, is a close relative of the Saguaro of the desert southwest. It is the tallest cactus in the world, lives for several hundred years, and has a fungal-bacteria symbiotic relationship that allows it to grow on bare rock. For birds, it is the perch of choice for everything from hawks to wrens, a source of abundant food,  a prolific producer of fruit and used by all woodpeckers for their nesting holes. On larger cardons it is not uncommon to see several bird species on a cactus at once and most birds whose territory includes a cardon will touch it several times a day for a song, a snack, and good luck. 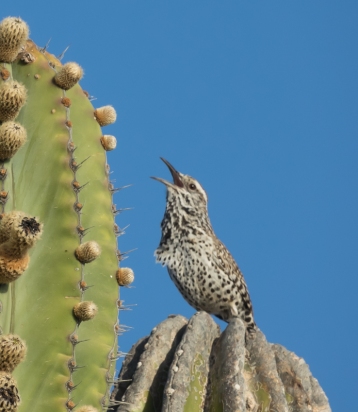 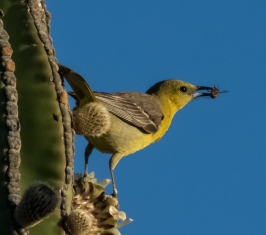 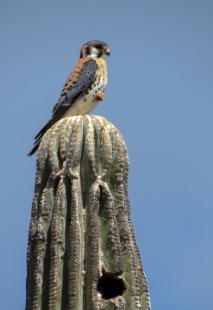 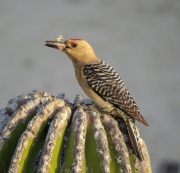 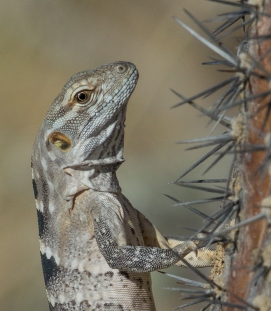 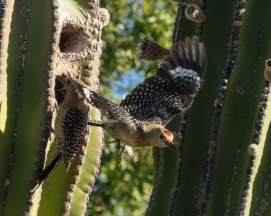 a male Xantus’ Hummingbird, endemic to Baja California Sur, photographed during the GBBC

For last year’s GBBC, I was working in Costa Rica, in the Central Valley. This time around, I was on the job in Baja California Sur, Mexico, at Villa del Faro. Over the course of the four days that comprise the Great Backyard Bird Count, I was able to go out three mornings and one afternoon in search for birds.

By the last day, I had seen most of the usual suspects, although I was unable to spot a Pyrrhuloxia, one of my favorite species here in Baja, which is quite shy. In total, however, I saw 38 species around Villa del Faro, which has a hotspot with 76 species, so I saw exactly half the birds recorded here so far (and two of them were only just reported for the first time yesterday).  END_OF_DOCUMENT_TOKEN_TO_BE_REPLACED

Check out my last post for an introduction to this series and to read about the Sierra de la Laguna.

At three hours away from Villa del Faro, the town of Todos Santos is a bit of a stretch for a day trip, but could be accomplished by a determined driver or could be an addition to a stay here on the East Cape. Todos Santos is a very pleasant town on the Pacific coast of the southern Baja Peninsula, and two spots in particular are relatively well-visited by birders in the region: a little wetland area right by the beach at the southern edge of town called La Poza de Todos Santos (poza meaning “pool” or “puddle”) and a hotel associated with the spot called Hotel Posada la Poza (posada meaning “inn” or “lodge”).

END_OF_DOCUMENT_TOKEN_TO_BE_REPLACED

Check out my last post for an introduction to this series and to read about the San José Estuary.

Down here at the tip of Baja California Sur, some part of the Sierra de la Laguna mountain range can be seen pretty much from anywhere with a good view inland. In fact, when you land in the Cabos airport, it feels next-door. When we were last here at Villa del Faro in July, Jocelyn wrote about some spots in the southern region of the Sierra Biosphere Reserve, and for our second trip last week, we visited the north (the middle is the most mountainous, with no access roads that we know of, just 6-hour hiking trails).

END_OF_DOCUMENT_TOKEN_TO_BE_REPLACED

Scenic side road on the way to El Triunfo.

If queso was a food group it would certainly be my favorite. But that’s not what this post is about – even though cheese is a primary ingredient in many Mexican dishes and I had lots of it this past weekend. What this post is really about is the kinds of unexpected quirks one encounters when road tripping in Baja California Sur (B.C.S) and the unusual, but interesting conversations that come up with locals. Seth and I covered three towns: La Rivera, El Triunfo, and Todos Santos, for different lengths of time, but each with a distinctive story to tell.

END_OF_DOCUMENT_TOKEN_TO_BE_REPLACED

Since last week, I’ve been based back at Villa del Faro in Baja California Sur, Mexico, where I’ll be co-managing the property with Jocelyn for a good while. In addition to having the opportunity to see what kind of birds show up here in their winter migration, I’m also hoping to have time to check out the surrounding region for other birding hotspots. I’ll do this not only for my own interest, but also because we may get guests here in the future who are bird-watchers.  I’d like to be able to recommend areas based on my own experience, so they don’t have to rely solely on eBird, which helps find certain spots but can’t give you any directions that Google Maps doesn’t have.

Nevertheless, eBird is one of the best ways to quickly figure out what locations within a region are popular for birding, whether because they have lots of species or because lots of birders pass through there (or both). END_OF_DOCUMENT_TOKEN_TO_BE_REPLACED 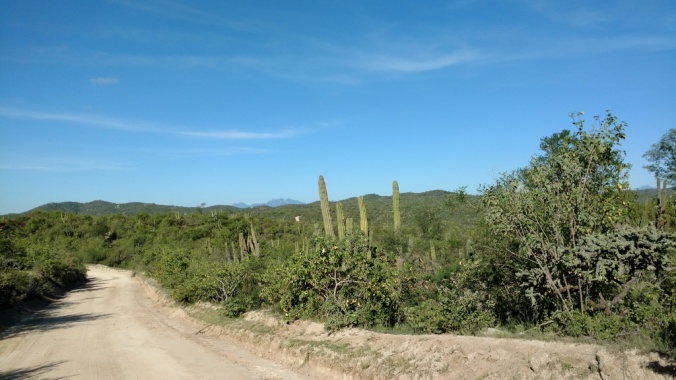 Green is not the first color I associate with Baja California Sur and as the coastal outline slowly became clearer through my plane window I was stunned by the vibrancy of color I was witnessing. The “rainy” season of Baja, which only means a few inches of rain in a span of three months, had transformed the dry, craggy landscape into a verdant, blossoming oasis. In my previous trip to Baja, I had been informed of this phenomenon but I was unprepared, nonetheless, for the volume of greenery and pop of pink and blue flowers.

END_OF_DOCUMENT_TOKEN_TO_BE_REPLACED

The title may be reminiscent of recent movies like “American Sniper,” or “American Hustle,” or slightly older ones such as “American Psycho” and “American Beauty.” But as the video suggests, the American Coot is a type of bird, a wading species in a family called Rallidae, which most non-birders probably haven’t heard of because the birds are typically either near water or hiding in dense vegetation. Coots, along with rails, gallinules, and crakes, make up the Rallidae family, and all these types of birds like to stay on the ground, very rarely flying or venturing into trees unless it helps escape a predator. They’re more closely related to cranes than to ducks.

END_OF_DOCUMENT_TOKEN_TO_BE_REPLACED

Ranchos, mountains, and coastline make up the bulk of Baja California Sur. The languid cattle or skittish chickens are what one most commonly sees when one is driving along the dirt roads, but if you take what might look like a short cut or a fun exploration route, you are most likely driving on someone’s driveway and will find a ranchero’s home at the end of it. I was keen to do some off-road exploring, particularly through the arroyos, but a car would not make it through and walking seemed too inefficient.  We were told by our neighbors (the only family that comes to vacation at their beach house exclusively in the summer time) two houses down from Villa del Faro that the family who delivers the water has a mule that they let people ride. As we talked more about the possibility of riding their mule up the arroyo, I learned that it was not a typical offer the family made to strangers, so that meant we were going to have to get introduced.

END_OF_DOCUMENT_TOKEN_TO_BE_REPLACED 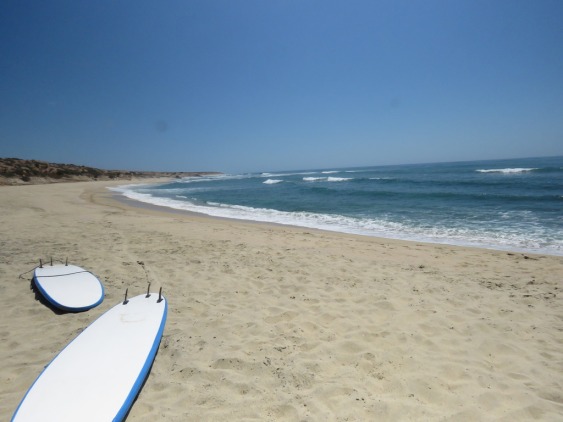 The shore down below Villa del Faro is known as Boca del Tule, since the Tule arroyo –– a seasonal river in the desert –– runs into the ocean at that point (boca means mouth in Spanish). The beach is public but very few people are ever on it, partly because we’re an hour away from the closest city, San José del Cabo, via dirt road. Now and then you’ll see a couple fishermen, or if the waves are good, some surfers. Last week, Jocelyn and I tried surfing both here at Boca del Tule and also at a better-known surfing beach just twenty minutes south called Nine Palms.

Both spots offered fair surfing for either experienced or newbie surfers, since END_OF_DOCUMENT_TOKEN_TO_BE_REPLACED

Yesterday morning I got up early to see the sun rise from the balcony at the hotel, and was pleased to see the full golden orb rise from the watery horizon to the east. While facing the ocean, I heard some distant slaps, like someone smacking their palm against the surface of the water, and looked across the kilometer or so (less, most likely) between the balcony and the shore to see some rays––eagle rays, I think––leaping out of the water, but also just poking the tips of their “wings,” or side fins, into the air without leaving the waves themselves.

END_OF_DOCUMENT_TOKEN_TO_BE_REPLACED 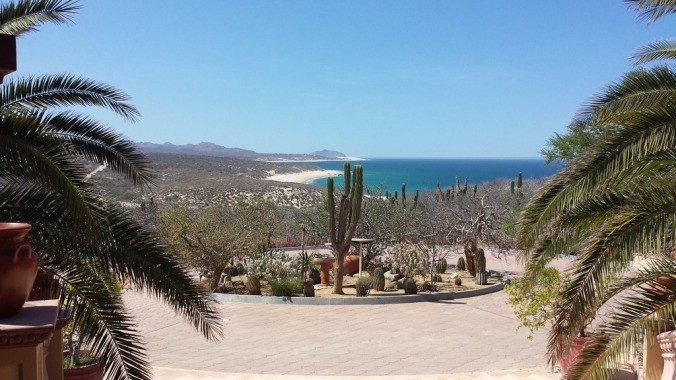 My first sightings of southern Baja California from the finger-smudged airplane window surprised me. I expected to gaze upon a flat peninsula with dirt roads connecting a sprinkling of homes; my expectation turned out to be half correct (and I dare readers to guess which part before peeking to the next line). END_OF_DOCUMENT_TOKEN_TO_BE_REPLACED

There are just over a dozen buildings on property, and most of them are for rent by guests wanting to get away from bustling cities or hectic work environments and come down to Baja for some relaxation and the sound of wind and waves.

Villa del Faro’s website references the architecture and interior design as a blend of Mexican hacienda and Italianate villa, which I think perfectly reflects the feel of the structures and decorations experienced as one wanders through the gardens and arches.

END_OF_DOCUMENT_TOKEN_TO_BE_REPLACED

We’ve posted about the biodiversity of this spectacular region before so when we came across this article highlighting the Cabo Pulmo National Marine Park it definitely drew our attention.

a 27.5-square-mile ecosystem with an unusual history and an uncertain future. At least 226 fish species live in the park, and it is home to the only living hard coral reef in the Sea of Cortez. But environmentalists fear that a major resort development could significantly alter this delicate fringe of Baja, both above ground and underwater. END_OF_DOCUMENT_TOKEN_TO_BE_REPLACED