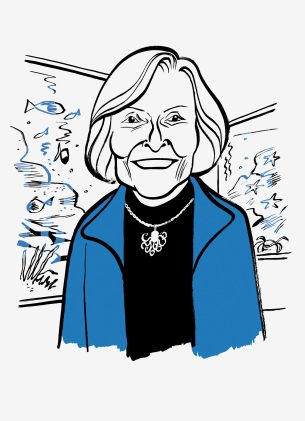 Yesterday’s post got me looking back at our attention to marine science over the years, making me wonder whether we have given that topic its fair share. Yes, probably, but more is needed. I already knew this name because it has appeared in our pages a few times over the years. But just recently I heard her name from two different people who have had the chance to know her personally. One of them, when I mentioned the name, replied with Her Deepness replacing Sylvia Earle’s given name. Thanks to Dana Goodyear, who had me at puma, but who also knows a thing or two about water, now this:

Without Sylvia Earle, We’d Be Living on Google Dirt

The marine biologist and aquanaut evokes a Bond girl with a Ph.D. To save a species, she says, you have to know it.

Do you like to breathe?” This is a question that the marine biologist and deep-sea explorer Sylvia Earle asks frequently. The ocean produces half of the oxygen on Earth. If it dies, humanity can’t survive, so humans better pay attention to it. When Google introduced its 3-D map, Earle pointed out that the designers had forgotten to include the oceans: it was Google Dirt, she said, not Google Earth. (Google fixed the oversight, with her help.)

Earle, a gamine eighty-six, has searching brown eyes and a smile that could illuminate the midnight zone, and has actually done so. In 1970, she led an all-female expedition to the ocean floor and lived there for two weeks—her riposte to men on the moon. Then she broke the world record for untethered diving, exploring at a depth of one thousand two hundred and fifty feet in a special pressurized suit. Pictures of her in scuba gear bring to mind a Bond girl, with a Ph.D. in the macroalgae of the Gulf of Mexico.

Since the eighties, Earle has been designing manned submersibles. (She has a company, with her eldest daughter, that also engineers deepwater robots, remote-controlled vehicles, and underwater camera systems.) In late April, Earle announced that she had received a grant to produce a new three-person submersible. Her dream is to take children to the seafloor, “democratizing access to the sea.” It will be ready in about two years.

The next day, which was Earth Day, Earle paid a visit to the Aquarium of the Pacific, in Long Beach. She had on a blue Ultrasuede jacket, black slacks, and an octopus necklace. “Let’s swim this way,” she said, easing through a school of kids, to the cafeteria…

Read the rest at the source.